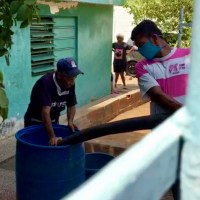 Venezuela is facing a water crisis, and almost no one is talking about it.

We visited a friend this week as he bought some water for his house. It looks clean, but you shouldn’t drink it. He doesn’t have any choice, though. He and his five children need water to drink, and nothing comes from the taps.

They live in a part of Venezuela experiencing severe water shortages. In some towns, water comes just once a month, for a couple hours at a time. Families scramble to fill the tanks in their homes before the flow is cut off again.

Even though they are careful, this family can’t make the water stretch far enough.

This week, our friend scraped together enough money to buy some water from a truck. He stores it outside his home in a plastic barrel. He boils the water before giving it to his kids to help their thirst, but none of them will drink enough.

Venezuela was in the news recently, as a series of Iranian oil tankers made their way across the world to bring fuel to what is arguably the most oil-rich country on the planet. The headlines were filled with speculation on how the United States would respond, as two countries devastated by US sanctions join forces to help each other survive.

This is a huge over-simplification, but Venezuela can’t easily extract oil because of the impact of sanctions. Iran can’t access cash, for the same reason—so a deal was struck. Venezuela would trade gold from their reserves in exchange for tankers full of oil from Iran.

It’s seen as a win for both countries, if only a temporary one.

Oil is essential for Venezuela. But you can’t drink it.

“There isn’t enough water for each day. People can’t take a shower every day—people go two and three days without being able to take a shower,” one of our Venezuelan colleagues explained.

We’re no strangers to water shortages in Iraq, but the economic context is completely different in Venezuela. In Iraq, if you have money, you can buy water. In Venezuela, there is little money, and little safe water to buy.

There is no water to flush toilets. Families are forced to live with the terrible bad smell, and the large number of flies it attracts. Washing clothes is another problem. Laundry is done just once a month, with little water. And that same water is then used to clean bathrooms and floors.

But water to drink? That’s tough. “There is little water to drink,” our colleague shares. “With temperatures rising, people don’t drink enough water.”

The truth is, most can’t afford to.

And with water so scarce—only enough to shower every few days—there certainly isn’t enough water for the frequent, thorough hand-washings needed to combat the spread of COVID-19.

Venezuela began to see a rise in COVID-19 patients recently, but because of years of economic chaos, the medical system is completely incapable of handling a spike. There have long been shortages of medicine and equipment in hospitals, but now, many also suffer shortages of water too.

It’s ironic then that it’s the rainy season in Venezuela, and yet not something to celebrate. The rainy season brings mosquitos and the diseases they carry—hard enough to manage before, seemingly impossible now.

In a recent global health study judging the ability of health systems to deal with crises, Venezuela holds a place near the bottom, along with countries like Syria, Yemen, and North Korea.

Cascading effects—that’s what Venezuelans are experiencing in response to so many years of sanctions, hyperinflation, and political conflict. The practical impacts of an economy in crisis are stacking one on top of another, and too many of the country’s residents are crushed underneath.

Honestly, it seems quite hopeless. And for families facing this on their own, it is.

But we have the chance to stand with our Venezuelan friends now, to help with emergency needs in the current crisis. We can provide sustainable, hyper-local solutions that fit each family’s needs. Instead of throwing our hands up in despair at what seems like an impossible situation, we can reach out and link arms—making space for hope and possibility.

I want to give to help our friends in Venezuela.