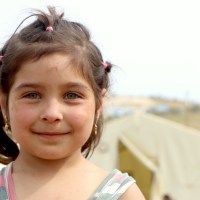 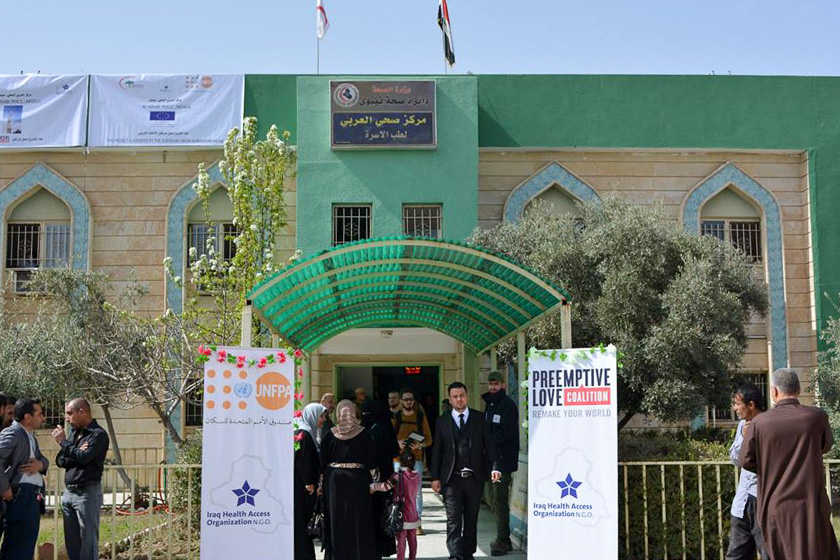 With three days notice, I flew to Iraq on a one-way ticket, simply because Preemptive Love asked me to and I could not turn down an opportunity like that. I knew they were going to Mosul and I wanted to witness their work in a city that is finally free from ISIS control.

I met Jeremy Courtney outside the hotel a little after 7am, and down the road we went, only stopping for breakfast (a lamb and bread casserole type dish—yum!) at a roadside restaurant. We convoyed in a line of white SUVs, driving fast around traffic and potholes (or were those IED holes?), towards Mosul city.

As soon as we passed the huge new refugee camps off the highway, we began to enter villages that lead into Mosul’s suburbs, and every single home, shop, and warehouse along the way showed signs of war—windows smashed, black burn marks from firebombs, rooftops blown off by airstrikes. We moved straight through the checkpoints and into the city unhindered, crossing a river path instead of the fallen bridge upstream, swerving to miss craters.

We arrived at the opening ceremony of a health clinic that you helped refurbish and restock. This is literally the first clinic to open in east Mosul, supporting thousands of families who were trapped here for years. 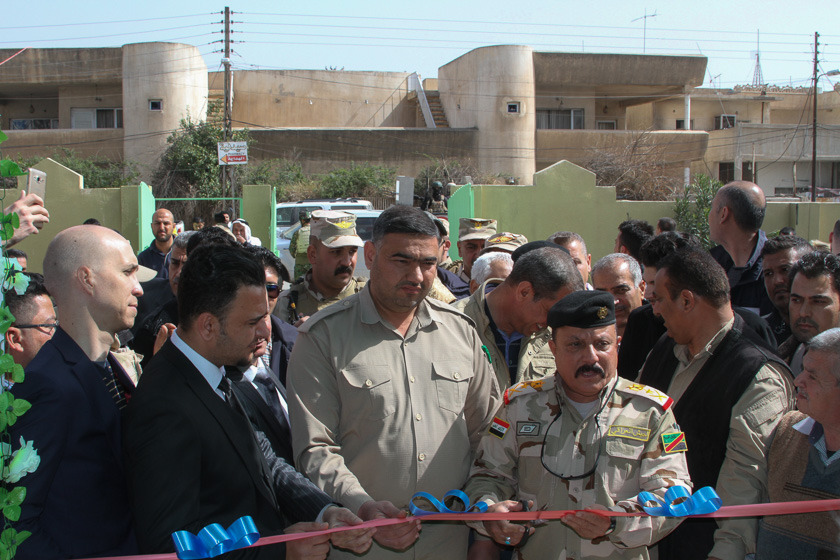 During the ceremony—which included our local partners, Iraqi government officials, and others—Jeremy made some brief remarks:

“God willing, we will be the last to leave. The first in with food and the last to leave, by creating and rehabilitating these clinics and making sure that we help you with your schools and your healthcare and everything you need to get back into a good situation. So on behalf of the people of America—private people, not government—Christian, Muslim, Buddhist, everybody, we just bring you all the love and wish you all the best with your new clinic.”

After the ceremony, I wandered the clinic to interview patients. While this was the official inauguration of the clinic, medical staff had already provided polio vaccinations here during the previous week, and on this morning it was already packed with parents bringing their children—mostly babies—for other immunizations.

Older kids cried and screamed at the sight of needles, women sweated in the heat. To the moms that I spoke to, it was the first time they’d received medical care in years. For many of their babies, it was the first ever.

Opening a medical clinic is bound to have some complications, especially when it’s in a neighborhood just liberated from ISIS. People I spoke to said the prices for prescriptions are too high, but with a shattered economy and only weeks of freedom, that makes sense and prices will almost certainly come down. A dentist walked up with a vial of anesthesia, exclaiming it was from ISIS days and that it had no expiration date and was unusable. Sure enough, on the label, which was printed in English, there was nothing to show if the medicine was any good and it would have to be trashed. But the shelves are stocked with medicines, and rooms have brand new microscopes and sanitizing machines.

From the clinic, we went just around the corner where we saw another sign of your presence in Mosul: aid trucks being unloaded of flour, rice, lentils, oil, tea and other staples that will feed 4,000 families, or about 24,000 people, for about a month. It was the very first aid these people had received since ISIS was pushed out, after years of being held hostage in their own city. This was Preemptive Love in action—truly the first to arrive, aiding families who had nothing. 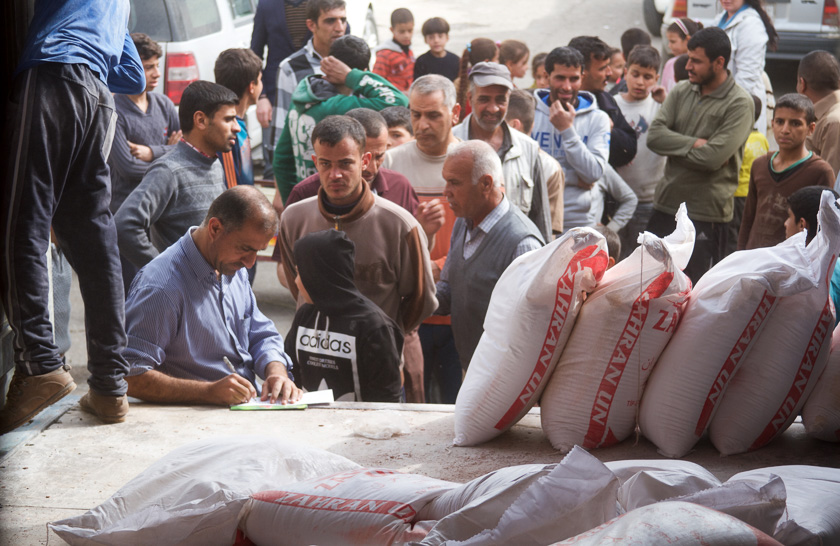 Dozens of kids crowded around us and pulled out their phones for a photo with the smiling American woman. I had about 30 kids following my every move—interviewing the local butcher about life under ISIS, meeting a fascinating man with a British accent (acquired while getting his PhD in the UK), and speaking to a lovely woman who told us how hard it had been—how under ISIS there was only ignorance and no life. That it was like hell itself. Her eyes lit up a bit when she told us that they are like prisoners who are finally free to do and feel what they want. She told us that this food was the only support they have gotten in two years. 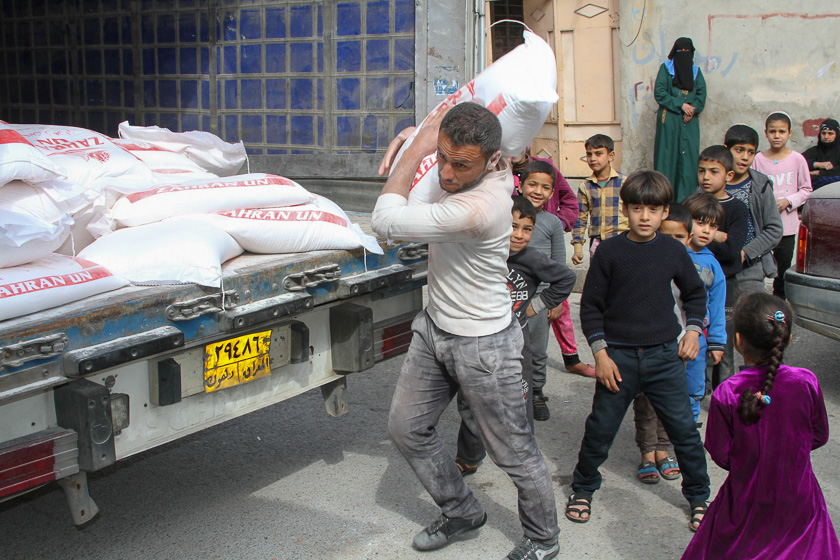 From there we moved on to the next stop, as Preemptive Love delivered aid to several Mosul neighborhoods that day. Again the children came outside to see what we were up to. I remembered I had a pack of small red heart stickers in my bag, so I pulled them out and pressed one onto a little girl’s hand, and said, “I love you!” and I blew her a kiss. This got giggles and smiles for sure. So I did the same with another girl, and soon enough, it seemed every girl in the entire neighborhood was coming to get a sticker. Had they been allowed outside during the years of ISIS? I’m certain not. Could they be in the streets and laugh and play and not be covered—even as children? No, they had been forced to remain in the home, all girls under wrap.

Next thing I knew, I was surrounded by about 50 kids, the boys laughing and the girls exclaiming, “I love you!” and blowing kisses back to me, repeatedly. I was trying to film the aid distribution and speak to the adults about their lives and the impact the food would have on their families, but I simply could not escape the gaggle of kids! 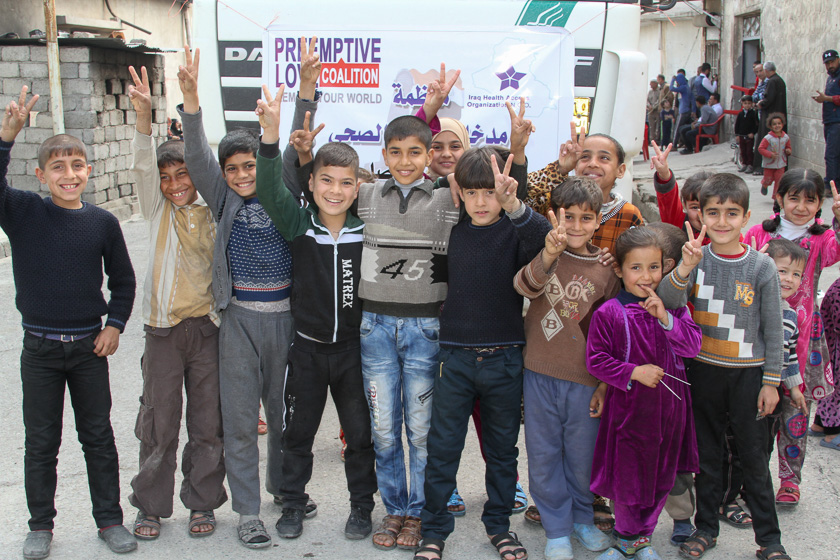 After an hour or so of this, I needed a break, so I hopped back in the car and still they stood outside the window yelling, “I love you!” back to me. It was amazing. These children have been through something you and I cannot even imagine, held hostage by the scariest men and unable to just be kids. But here they were, running around while their parents picked up the food aid, laughing and playing with the love and joy that all children are born with.

When I met the people here and saw their faces, I understood how amazing everything you’re doing really is—you are directly impacting the most innocent and vulnerable people in the world. Because of your love for them, they now have food and medicine, they will soon have water—and they definitely love you back. The children of east Mosul told me so!

Thank you for showing up for these families and for staying to help them rebuild, even after the most urgent needs are met. The work of Preemptive Love Coalition is far from over in this region.

Thank you for being both the first in and the last to leave.

Stay with families in Mosul and help them rebuild—by becoming a monthly sponsor.