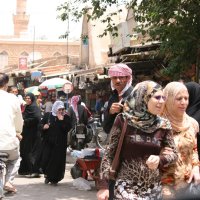 Historians will tell you—sieges can get ugly. A siege is an especially brutal weapon of war, a tactic favored by aggressors who can afford to be patient. They surround their “enemy,” cutting off roads and essential supplies until the people inside grow desperate enough to surrender.

Like we saw in parts of Mosul earlier this year, those who are besieged run out of food and medicine. They run out of fuel for cars and cooking. Life quickly narrows to trying to survive. Eventually all but the strongest are starved into death or submission.

And then sometimes, like we saw in Aleppo a year ago, the dam bursts in an instant. Suddenly thousands of people are fleeing for their lives on foot, with no shelter and no food.

The word “besiege” sounds ancient, perhaps because many of us first heard it in history class—say, the Roman siege of Jerusalem two thousands years ago. But sieges remain an effective, brutal, modern weapon of war. And they continue to be used against the Syrian people, most recently in the city of Deir ez-Zor.

Our Syrian staff are told the besiegement of this city is “one of the great crimes of our times, reducing a [governorate] of 1.5 million residents—one of the richest in Syria with its families of elite oil barons—to one of murdered corpses, starving refugees, and penniless scavengers wandering the streets.”

For three years, the remaining 100,000 residents of Deir ez-Zor, ordinary Syrians, endured three separate waves of sieges. “Most people fled the city,” the local hospital director told our staff during a recent visit.

So what is it like to live in a besieged city?

“ISIS was 100 meters from my office wall,” the hospital director continued. “Because of them, my son has lost all faith in God.”

Then he joked darkly, “We are so used to the sound of gunfire at night, we can’t sleep without it. If there happens to be a night without shooting then we play a tape recording of gunfire just to get some sleep!”

“No good water to drink.”

The Euphrates River runs through the center of town, but it was guarded so that people couldn’t use it for irrigation or drinking—on pain of death.

One of the local medical staff, Samira, explained, “No one could drink from the river because it’s impure, and because of ISIS snipers. So there is no good water to drink. The water we drink is pumped from underground, coming about once a week.”

“Because of the bad water,” she added, “now everyone in Deir ez-Zor has kidney stones—the mineral content of the water is so high.”

“Do you know what it’s like to be hungry?”

“About a year ago, some of the men tried to break the siege by leaving the city to get food,” another medical staff member explained. “But their heads were cut off by ISIS terrorists.”

“Do you know what it’s like to be hungry?” Muhannad asked. As student, he survived the years of hunger.

“We know what it’s like to fast… for religious reasons,” our staff replied.

Muhannad hadn’t eaten bread since before soldiers cut his city off from the rest of the country. Residents asked incredulously, “How can we eat bread? The line for bread is so long, you have to wait two days, and sleep at the bakery just to get a little.”

In other parts of Syria, government subsidies kept the price of bread affordable—around 25¢ per kilogram. But in Deir ez-Zor the price skyrocketed to nearly $19 per kg. Few could afford bread even if it was available.

“Thank God no one was killed.”

“You see that hole in the wall? That’s where they bombed us last night.”

The most recent bombing took place the night before we came. On top of the crippling food shortage, residents must cope with is a constant barrage of bombings.

“Last night our medical clinic was bombed by ISIS,” the clinic staff said. “Look—there is the hole in the wall from their rocket! Thank God no one was killed.”

On one day in early September, residents witnessed something unimaginable—both tears of suffering and cries of joy in their beloved city of Deir el-Zor, the heart of ISIS-dominated territory of East Syria.

The three-year siege that ravaged every family in Deir ez-Zor was broken.

You played a supporting role with the first team to go into Deir ez-Zor after the blockade was broken. Today you are leading the way to bring meaningful help to Syrian families there.

And it all started one year ago, when you showed up for the families of Aleppo, when you refused to sit by while thousands streamed out of yet another besieged city in Syria. The work you started then continues today—it has expanded to reach even further into war-torn parts of Syria.

Your love is on the ground. Come back tomorrow to hear what happened next in Deir ez-Zor.