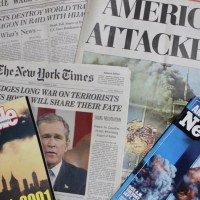 And each year as this day arrives, we pause to remember. We remember when we heard the news, where we were, how we felt. We remember the fear that rose in our throats, the fear the began to change the way we walked in the world, the way we saw each other. American or Iraqi, Muslim or Christian, adult or child, September 11 has shaped who we are and the world around us.

September 11 also set in motion a chain of events that led to the formation of Preemptive Love. As the United States launched into Iraq, to wage war against an enemy that had nothing to do with 9/11, we launched into Iraq to wage peace.

Throughout this week we’ll be sharing stories and reflections from some of our colleagues on their memories of 9/11. On Wednesday, we’ll release a special episode on our Love Anyway Podcast.

Charlene Winfred, who was born in Singapore but lived in Australia at the time, experienced firsthand what it was like to be profiled because of the color of your skin after 9/11.

At around 1 in the afternoon the phone rang and my friend yelled, “Turn on the TV!” and then hung up. I turned on the TV just in time to see a plane crash into a tower.

Fear grew, and it found easy targets in anyone who looked like the “bad guy”—a brown, Muslim man. I’m biracial, 50/50 Indian and Chinese, but looking at me you’d never guess there was any Chinese. I look like the “bad guy” in some cases, as some customs officers have reminded me of. For a while when I disembarked from some airports in the US, I and whoever was with me were herded through the special queue for brown people. In Australia, where I was a resident, it was much the same.

Moving through communities all through the world, I’ve learned to be good at making myself palatable as possible to dominant groups. I won’t speak for everyone else who is brown, but particularly for me, it’s getting harder and harder to keep an even keel, to keep pleasing people as I get older. The demands of being, of trying to blend in, to be acceptable, are huge. It’s exhausting. There has to be space to talk about this or the status quo gets maintained.

My daily life is a reminder that kindness really does exist in the world. If you step back and look at the larger picture, yes, the world seems horrible right now, but we have people out there doing good work, it’s a sign of hope.

Wendy who was 34-years-old and living in California, reckoned with fear and uncertainty in the aftermath of 9/11.

On Sept 11, I heard via email from someone that there had been an explosion at the World Trade Center. Then the phone started ringing. I heard from my husband, my mother. I was glued to the television all day. Image after image of destruction, people screaming and running through the streets. Bodies falling. Lots of speculation. Lots of uncertainty. No answers. I could not stop staring at the TV. All I felt was horror.

In the days that followed it was more of the same.

I felt numb and thought I was handling it well. Days later I remember crying watching images of people sobbing and searching for loved ones that I was sure must be dead. The posters, the pleading for information. Life suddenly seemed acutely more precious and fleeting and fragile.

It felt like the world had gone to hell. But there was also heroism, patriotism, an outpouring of money and volunteerism. It felt like we were uniting and showing grit and pride. I was a proud American and the good things I was seeing seemed to illustrate what I’d thought about the United States all along.

Well into October I journaled a lot about anthrax and Afghanistan and the new Homeland Security office. I was simultaneously okay with and also disturbed by this idea of the government’s new powers to “protect” by any means. Everyone was scared all the time. Striking out seemed only fair. “They” were coming for us. “They” were crazy.

I spent a long time feeling justified in supporting violence under the guise of safety, because I didn’t understand what Islam really is. I thought the Muslims I saw on the news were all Muslims. I lived in an insular world, wrapped in fear and kept around me the people who made me feel safe… the people who looked like me.

It wasn’t until years later that I was able to step past that fear and see people as people, not as their ideologies.

Michel was 13-years-old, living in Lebanon, when he heard about the terrorist attack.

In this part of the world, or at least my community, we knew about it by the news and watched the actual footage many, many times. We all were expecting the U.S. to have a stronger and more powerful response to al Qaida. We thought Bin Laden had to pay for what had happened.

I was young at the time and it was actually not a very big deal for me since I was so far away from this event. In a week or two, nobody mentioned it anymore. Now it hurts much more to think about how terrible it was and the families and people who died for no reason and out of the blue.

The biggest link I have to 9/11 happened when I actually stood in New York City where the towers were and when I used the train station beneath. It looks beautiful, yet one can feel the misery of the souls who were lost in the location.

We are still learning to live with the legacy of 9/11, still trying to heal what’s tearing us apart. Later this month, we’ll share a vision for how we can build something new from the ashes: a new kind of community where we take a step toward those we fear or misunderstand, where we start to live like we really do belong to each other.

That’s the vision behind the new book Love Anyway and a new film of the same name, both releasing September 24. You can learn more at LoveAnyway.com.

On September 11, we remember all we lost that day 18 years ago. On September 24, we can take our first steps out of exile, together. And launch into a new way of living and being and belonging to each other.