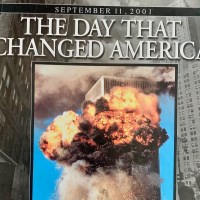 Throughout this week we’ll be sharing stories and reflections from some of our colleagues on their memories of 9/11.

Saadia, a Muslim American, was 25-years-old, newly married, living and working in Florida.

I was driving to work, I worked as a Compliance Environmental Inspector. I had just gotten married two years prior to that.  I heard the news and I didn’t even know how to comprehend what a building “going down” meant or what was happening. Then the second building collapsed. We were all in disbelief and cried together.

As a family, we were panicked at a different level as well—my husband’s brother had an internship in Manhattan.  His building was three blocks away from Ground Zero.  We were so scared because for a good couple of hours we couldn’t get hold of him. Finally, a cousin got through and thankfully he did not go into work that day because he was sick.

No one went out for inspections that day.  And then it came—the official report that it was terrorism. Muslim terrorism. My boss at work asked if it was okay that I do not go on inspections for a little while, for safety reasons.

And then came the call to actions, from the Muslim community.  Asking us to be careful, be diligent, be safe.  Some of the top Islamic scholars even advised that if a woman in hijab feels unsafe going out in her hijab, that it would be okay to take it off. I didn’t take mine off. I was angry at the people who claimed to be Muslim and did this “in the name of Islam.” Those “Muslims” hijacked planes, also hijacked our religion.  We were public enemy number one and it was due to some “Muslims” under the guise of Islam.

But we got through it, sort of.  We went to vigils, tried to stay vigilant, tried to prove to everyone that we aren’t “them.” In the beginning, we laid low didn’t make too much noise, because we didn’t want any eyes on us.  And then we decided that people needed to know us. So we tried to be more involved in our community. We made a conscious effort to be present for others.  We would get the occasional side-eye, our kids would get racist comments made to us. But we decided that to change the narrative, we had to be a part of creating the new story.

We told our children that it was just bad luck.  That the people who did this had nothing to do with Islam or its teachings.  That killing an innocent person is like killing all of humanity.  That we, as good Muslims in America, need to be good humans. The people who did this were neither, and for them to use God as a reason for doing this is a betrayal to God and humanity. That there is good and bad everywhere but this was a particular type of evil because the short-term and long-term effects were so vast.  And sadly, we keep having these discussions over and over again after every mass shooting, after every tragedy caused by humans.

Kayla was in middle school in the Twin Cities when she learned about the attacks.

I was in class when we found out. Teachers were crying and TVs were brought in for us to watch. I didn’t understand the significance or the gravity of what was happening. As we walked home from school that day we passed near the airport and noticed no planes were flying, that it was eerily quiet. And then a few fighter jets flew by. I was mostly a little scared and a little confused.

I remember going on the internet to read more and my mom told me not to look at pictures. When I learned about people jumping from the towers, I really realized the humanity of what happened, that it was people.

I grew up feeling like it was “us versus them.” I wonder how I would have seen the world if I hadn’t grown up with that one experience positioning everything in polarized sides.

Ihsan lives in Iraq and was 14-years-old on September 11.

It was evening and I was at home with my family. A carpenter was there to fix a doorframe. During that time in Sadaam’s regime all houses had TV. There were only one or two stations available at the time—mostly news and propaganda stuff. They broadcasted 9/11 live through international TV stations.

Ben was 24-years-old on September 11, working in his first job post-college, and pursuing a master’s degree in Michigan.

That morning my boss came by and said, “A plane crashed into one of the Twin Towers in New York and it looks pretty bad.”

I found a TV downstairs just as the news switched from New York to Washington, DC. The camera showed smoke rising somewhere behind the White House. I use to live in DC, and I knew where the smoke must be coming from.

I remember wondering, “Where is it going to stop? How bad is it going to get? How far are these attacks going to reach?” There was a sense of dread and powerlessness.

Then there were anthrax attacks in the mail and nobody knew if it was connected to 9/11. It fueled this low-level panic and unease and fear and paranoia.

Even though I like to think of myself as pretty level-headed and compassionate, when they started beating the drums of war, I went with it. The fear compelled me to shove down the questions and misgivings I had. I wanted to feel safe. We didn’t have a tangible enemy to go after, so eventually we found one in Iraq.

My views started to shift a year or two later, when I had the chance to form real and meaningful friendships with people outside the US.

We haven’t had a 9/11 scale attack again in America, but we haven’t prevented terror from happening in America. Terror is complicated. And when we try to bomb our way out of the mess, we inevitably fail.

We’ve tried almost 20 years of war after 9/11 and it hasn’t worked. Maybe it’s time to try something different.

We are still learning to live with the legacy of 9/11, still trying to heal what’s tearing us apart. Later this month, we’ll share a vision for how we can build something new from the ashes: a new kind of community where we take a step toward those we fear or misunderstand, where we start to live like we really do belong to each other.

That’s the vision behind the new book Love Anyway and a new film of the same name, both releasing September 24. You can learn more at LoveAnyway.com.

On September 11, we remember all we lost that day 18 years ago. On September 24, we can take our first steps out of exile, together. And launch into a new way of living and being and belonging to each other.