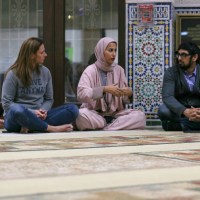 It’s easy to stay in our circles, to keep to the people we know, who are familiar, who look and believe like we do. But there’s power in widening our perspective, in seeking out those who are different from us.

When we try to understand others, when we experience part of their daily existence, it creates empathy and connection. Barriers come down. That person who was “the other” is now someone we understand, we know.

Christianity and Islam are the two largest religions in the world, and they’re often set up in opposition to each other. So what if you took a step and visited a mosque. What new relationships, connections, and understanding could be borne out of your visit?

Visiting a Mosque: Everything You Need to Know

Is a Mosque a Muslim Church?

Mosques are places of worship for Muslims, but also contain teaching and community spaces. They’re a central gathering place for Muslims, both for worship and faith and also for community and learning.

When Do Muslims Go To Mosque?

Muslims pray five times a day facing Mecca. The mosque is available for any and all of these prayer times, but communal praying at the mosque is always encouraged, particularly for the midday prayer, and especially for midday prayers on Friday.

Muslims often attend the mosque on Friday for midday prayer, teaching, and sermon. Mosques are also used for weddings, funerals, and Ramadan festivals and prayer services. They are also used as community spaces and sometimes offered as homeless shelters as well.

Who Is the Head of the Mosque?

The head of the mosque is the Imam, but not all mosques have one. Some mosques might use a visiting Imam, or members of the mosque community might serve as the prayer leader or teach from the Muslim Holy Book.

Will I Even Be Welcome?

You might question whether a mosque is even open to you, if it would intrusive and disrespectful to go into a place of worship where you believe differently. However, like most churches and other places of worship, most mosques welcome visitors of other faiths.

Some mosques hold periodic interfaith gatherings or open houses, so you can look to see if one of these will be happening at your local mosque.

Call Before You Go

You can do a quick web search for “mosque,” “Islamic center,” or “masjid” (the Arabic word for mosque) to find one close to you. Before you go, it’s a good idea to call and ask if they are welcoming visitors right now.

Many mosques understandably have heightened security. And in some cases, like after the New Zealand mass shooting, they might be asking visitors to schedule a visit for a later date.

You can also ask when would be the best time for you to visit. Friday prayers are often a great time to attend, meet community members, and observe worship customs.

Keep in mind that many mosques are rather small and might not have staff available to answer the phone at all times. If you call and don’t receive an answer, don’t be discouraged. Give it another try. You might also reach out by email, their Facebook page, or through their website, if they have one.

What to Wear to a Mosque

Men and women should both dress modestly, in looser-fitting clothing that covers the arms and legs—no shorts or sleeveless shirts for either gender. Women should also bring a scarf. Not all mosques will ask female visitors to cover their heads, but it’s a sign of respect to have one ready. (But if you forget a scarf, don’t worry. Most mosques have extra.) Makeup is OK. And kids can wear whatever they want.

You’ll also want to be sure to wear clean socks or stockings, because you’ll be asked to remove your shoes before you enter the prayer area. (Many mosques have a room/shoe rack just off the entrance where you can safely store your shoes and other personal belongings.)

Pursue peace through action. around the world, where you live. Join The Frontline.

How to Greet People

Most mosques are very welcoming communities—don’t be shy!

To greet someone, you can use the traditional Islamic greeting “Asalam ‘alaykum,” which means “peace be upon you.” Don’t worry about mispronouncing it. Most people will be delighted you made the effort.

Feel free to shake hands with people of the same gender. When greeting someone of another gender, follow the other person’s lead. Some will be perfectly comfortable shaking hands; others will prefer not to. In such cases, a suitable alternative is to put your hand over your heart.

Remember it’s OK to make mistakes, as long as you’re being respectful and observant.

Expect to be welcomed! The Muslim faith places a high value on hospitality. People are incredibly friendly, especially if they know you’re coming and are ready to welcome you.

When you arrive, someone will probably show you where to remove and store your shoes.

Be sure to silence or turn off your phone. This is not the time to take selfies, text, or make phone calls. Don’t hold conversations or talk once you’re inside the prayer hall.

Muslims perform ablution (ritual washing) before entering the prayer hall. Some mosques have specially equipped bathrooms for men and women to wash their faces, arms, and feet. As a visitor, you probably won’t be expected to do ablution in order to enter.

The prayer hall will not have pews or seats; people sit on carpets or rugs. There might be a few chairs available for people with disabilities or the elderly.

There are different entrances for men and women, who sit on different sides of the prayer hall. Depending on the mosque, there might be a partial or total barrier dividing the women’s and men’s sections of the hall. If you’re visiting with young children, they’ll generally be able to stay with you, regardless of gender.

People will stand, bow, prostrate and sit in unison at different points during the prayer. You don’t have to join in; you can just observe quietly. When a Muslim is praying, they will not talk or respond to you until they have completed the prayer. You can ask questions before or after.

As it’s considered disrespectful to walk in front of someone who is praying, you might be asked to sit in the back, so you can observe the service from there.

Friday prayers tend to be a longer service, as they include a sermon, customarily delivered in two parts. The sermon is often entirely or partially in Arabic and is followed by prayers. Depending on the mosque, the service will last anywhere from 30 to 60 minutes.

The most important thing to remember during your mosque visit is to be fully present. Don’t be so worried about doing the “right” or “wrong” thing that you miss the chance to connect with someone different from you.

This is how peace is waged—by taking one small step into the unknown. By getting to know someone who looks different, prays differently, or sees the world differently than you do. This is how we push back against fear, polarization, and mistrust. This is how we make the more beautiful world together.

Pick up the phone today and get in touch with your local mosque. Take one small step toward peace.