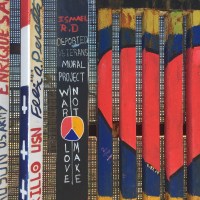 Hundreds of families arrive at the US border in El Paso every week, fleeing for their lives, seeking asylum—and we are stepping into the gap to help.

What’s really happening on the border, why should we show up, and how are we responding? Here’s what you need to know…

Why is an Iraq-based organization responding to a US crisis?

For years, we’ve served on the frontlines of conflict and crisis. This work has taken us far beyond Iraq—into Syria, Libya, Israel and Palestine, and the United States.

So we work to end war and violence, to heal all that’s tearing us apart—wherever we are.

The US-Mexico border is our frontline. We’re bringing years of expertise serving those displaced by conflict, and we’re coming alongside local friends who’ve spent years caring for migrant families here. We’re using what we know to build local capacity to meet this crisis head on.

Are you helping people who came here illegally?

The families we’re helping came to the US legally.

They presented themselves to a US official at the border and requested asylum, in keeping with US government policy. Once they request asylum, they are processed by US Customs and Border Patrol, then detained by ICE.

If officials believe they have a plausible case for asylum, and if they are deemed not to pose a flight risk or a criminal threat, they are released and sent to a sponsor family who provides for them while they wait for their asylum hearing. They are not eligible for federal government assistance while their case is pending.

Why are these people coming to the US?

Most are fleeing violence and poverty in their home countries: Honduras, El Salvador, and Guatemala—sometimes known as the Northern Triangle. This is the most violent region of the world not in an active state of war.

Most asylum seekers we’ve met arrive as a family—usually one parent with 1-2 children. Some fled from a violent spouse. Most fled gangs that extort family-owned businesses and threaten to forcibly recruit or kill their children.

Why is gang violence such a problem in Central America?

Like many conflicts, the one in Central America one defies easy explanation. But at least one reason for the epidemic of gang violence there is this: we exported it.

The crisis was fueled in part by the mass deportation of gang members from the US to Central America in the 1980s and 1990s, including those convicted of both violent and nonviolent crimes. Many who were deported had no meaningful ties to Central America.

As we’ve seen with ISIS in Syria and Iraq, alienation and a lack of opportunity became the perfect recruiting tools to lure young people into a life of violence.

These gangs target women and girls for kidnapping and assault. They threaten to kill or forcibly recruit boys into their ranks. They extort family-owned businesses for “protection” money. Those who don’t go along with their demands face a stark choice: flee or die.

What happens when a family requests asylum at the US border?

The US government has implemented a metering system, allowing only a certain number of asylum seekers to cross the border each day. Families must wait on the Mexico side, sometimes for days or weeks, until their number is called.

Once asylum seekers are allowed to cross, they are detained by ICE for processing. Several first-hand accounts have described challenging conditions inside the detention centers:

Those deemed not to be a threat are eventually released in El Paso to await their asylum hearing. They are released without any guidance, except for paperwork most of them cannot read.

ICE has, on occasion, released hundreds of asylum seekers at once. More recently, there has been some coordination between ICE officials in El Paso and local organizations seeking to help those released.

Asylum seekers are eventually placed with extended relatives living in the US or with host families—but there is often a 2-3 day gap where they have no support.

That’s where we are stepping in to make sure their most critical needs are met.

Will these families be allowed to stay in the US?

That depends on the outcome of their asylum case. Hearings take place anywhere from six months to a few years after they arrive—during which time their location is strictly monitored by immigration officials.

Approval rates vary, but typically, fewer than 1 in 3 asylum requests are granted. According to local reports, the approval rate at one El Paso court processing Central American refugees is as low as 3%.

Is this about the border wall or the US immigration debate?

No. It’s about people. It’s about our posture—what kind of people we want to be—more than what positions we take.

The humanity of our Central American friends isn’t measured by their immigration status—and neither should our willingness to meet their most basic needs.

Why don’t you help people in their home countries instead?

This is the first phase of what we hope will be much bigger response to the Central American refugee crisis. Because this is a new and, frankly, polarizing issue for a lot of people, we don’t know how many of you will go with us to the border… or beyond.

But we are committed to ending war wherever it starts. We believe in the power of choosing to love anyway.

And we know that most refugees—whether they’re from Syria or Central America—don’t want to leave home.

We’re actively exploring opportunities to serve in the most affected communities in Central America. If enough of you take this leap with us, we’ll go in a heartbeat.

But we also know: you can’t love from a distance.

How do you know the people you’re helping won’t bring all the violence with them?

The short answer is: we don’t.

But here’s the question we ask ourselves every day: are we willing to put ourselves on the line—our bodies, our well being—even if it costs us our lives?

Love is risk. But not all risks are equal.

Research across the ideological divide points to the same conclusion: immigrants, legal and illegal, are less likely to commit crimes than the native-born population. In fact, the surge in immigration in the 1990s corresponded with one of the most significant drops in violent crime the US has ever seen.

There are many valid reasons for different approaches to border security and immigration policy. But admitting asylum seekers who are trying to escape violence does not lead to an increase in violence here.

Can we eliminate all risk? No. Should that stop us from being the people who love anyway? We don’t think so.

Why do you call them “refugees”?

A refugee is defined by the UN as someone who is forced to leave their country because of war, violence, or persecution. Those fleeing Central America aren’t just “migrants,” though many of them are desperate for the chance to provide for their families. They’re refugees fleeing one of the most violent regions on the planet.

RELATED: THE DIFFERENCE BETWEEN A REFUGEE, A MIGRANT, AND AN ASYLUM SEEKER

Their experience is similar in many ways to that of the people we serve in the Middle East. Many of our Syrian refugee friends fled because otherwise their sons would be conscripted to fight in their country’s civil war—much like many Central American families flee so their sons won’t be forcibly recruited by violent gangs.

The UNHCR, the governing body for refugee protection and care, recognizes those fleeing Central America as refugees. So do we.

Why are you getting involved now? Why El Paso?

We’ve spent years listening and talking to local groups serving on the border.

El Paso, Texas, sits on the frontlines of the asylum crisis. It’s one of the most active crossing points for asylum seekers. This isn’t a new phenomenon, but the number of families arriving at the border fleeing violence and poverty has increased significantly. Once they are released from detention, they have almost nothing to support them until they reach their sponsor families.

We’re coming alongside local friends who’ve been responding to this crisis since long before it made the news. In fact, they’ve been serving immigrant families here for over a decade.

They know the needs. They know how to help, but their capacity is maxed out. So we are providing support—building up these local groups, just as we do in Iraq, Syria, and beyond.

This response isn’t about us. It’s about coming alongside our friends who are already here, already doing amazing work—and providing what they need to continue serving families in crisis.

Why are you providing emergency backpacks?

Asylum seekers are released into the US with almost nothing. Many have to wait days before they can be placed with relatives or a host family, where they will stay until their hearing.

The backpacks we’re providing are filled with essentials designed to help them get through those first few days. Many of us know how overwhelming it can be to set foot in another country for the first time. Imagine having to do so with almost nothing.

Each backpack includes items tailored to the needs of the person receiving it—things like:

Our goal is to deliver 10,000 backpacks to refugee asylum seekers by the end of June.

The families we’re serving face the same fate as those we serve every day in other parts of the world. Violence is unmaking their reality. But we can show up. We can be the people who love anyway. Join us.