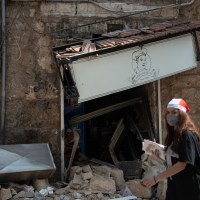 Last week’s explosion in Beirut didn’t just create a crisis—it worsened an existing one. Here’s the latest on the situation in Beirut and our rapidly growing response.

After a weekend of protests and sometimes violent clashes, Lebanon’s government appears to have collapsed. Angry at last week’s explosion and the growing economic crisis, Lebanese citizens took to the streets and stormed several government offices. They were met with tear gas and rubber bullets.

At the time of writing, Lebanon’s prime minister has announced he will step down. But huge questions remain about the future. Will those in power attempt to form a caretaker government until elections can be held? Will the ruling elite who’ve held power in Lebanon for decades truly stand down? Will anything less than a completely new government be enough to quell the massive protests, driven largely by Lebanon’s younger generations?

The risk of widespread hunger, fueled by rising unemployment and a collapsing currency, was a concern even before the explosion damaged half of Beirut. Unlike a traditional famine, though, this crisis is not driven by a lack of food, but by the inability to access it.

Earlier this summer, a bag of rice cost as much as $10. Milk sold for over $30. The money in your pocket just doesn’t go as far as it used to in Lebanon.

On top of that, Lebanon imports 80% of the food its people rely on. Until last week, most of that food went through the port of Beirut.

RELATED: Lebanon Cannot Handle This Crisis On Its Own

The port was largely destroyed in the blast. While officials insist the country will not run out of wheat, its main grain silos were casualties of the explosion. Imports are being routed to the country’s secondary port in Tripoli. But the port of Tripoli can only handle 60% of what Beirut could. This means food won’t get to the most vulnerable families—those who were at risk of hunger even before the blasts—quickly enough.

The port of Beirut was also a major supply line for humanitarian aid bound for Syria, raising concerns about families there, struggling to survive a decade-long war.

Lebanese officials estimate that 200,000 homes were affected by the blast, including more than 3,000 so heavily damaged that they are uninhabitable. Several hospitals and schools were also affected.

World leaders have pledged $300 million to rebuild Beirut—far short of the estimated $10-15 billion in damage—but only in exchange for significant political and economic changes.

Our Response Is Growing

We’re delivering hundreds of hot meals every day, especially for those who can’t leave their homes due to illness, disability, or needing to care for small children.

We’re also renovating an existing kitchen in Beirut. We’re repairing broken windows, providing food, and supplying new equipment—stoves, refrigerators, and more—to help our friends feed as many families as possible. We are currently serving 1,300 meals to a day, preparing them at the kitchen and delivering them to families affected by the blast.

For now, providing food is our priority, as close to ground zero as possible. In addition, we’re exploring longer-term ways to help people get back on their feet. We’ll have more to share about this soon.

This is a different kind of emergency in some ways, because it affects everyone. It’s not just the poorest of the poor (though these friends are certainly among the most vulnerable in a disaster like this). Even those who had the resources to provide for themselves before the blast have suddenly lost everything. We are standing in the gap for them as well.

But the most important thing to know about our response in Beirut? It is led by local, Lebanese people. If you’ve been following our response since last week, you’ve seen our colleague Michel more than once. Beirut is his home. Our local staff and partners have grown up here. They know these streets and neighborhoods.

This is who we are. We invest in small, local organizations that know the people, places, needs, and solutions best. This is true everywhere we work—and Beirut is no exception.