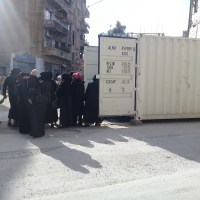 Yesterday, Russia and Turkey announced a ceasefire establishing a security corridor in Idlib, the last opposition-held province in Syria. What does it mean for the roughly one million people running for their lives right now?

The Syrian government and its Russian allies have been stepping up their effort to recapture Idlib and bring a decisive end to a war that will turn 9 years old this month.

Close to one million people have fled since December—more than half of them children. And for many of them, this is their second, third, or fourth displacement. Every time territory changes hands, families from former opposition-held areas have fled (whether by choice or not) to Idlib, causing the local population to swell, even as government forces close in.

It’s a recipe for a massive humanitarian crisis—maybe the worst of the entire war.

Meanwhile, Turkey has sealed its border to the north, meaning for most people in Idlib, there is literally nowhere left to go.

Why are Turkey and Russia negotiating over Idlib?

Turkey backs the Free Syrian Army, a loose coalition of militias fighting in Idlib. The Turkish military has also long maintained a presence inside Syria. Turkey opposes the Syrian government, which is backed by Russia.

Further complicating an already complex web of proxy wars, Turkey is a member of NATO, a military alliance designed in part to contain Russia. Turkey and Russia are on opposite sides of the Syrian civil war. Yet in recent years, Turkey has moved to normalize relations with Russia.

The two countries have competing objectives in Syria, yet both are anxious to avoid direct confrontation.

Read More: A Definitive Guide to Turkey, the Kurds, and the Conflict in Northern Syria

The ceasefire negotiated by Turkey and Russia calls for a “security corridor” to be established along a major highway, in effect creating a “no man’s zone” across Idlib. Turkish and Russian forces will jointly patrol the corridor. The ceasefire was scheduled to go into effect today.

But there are three important things to note about this ceasefire…

1. Ceasefires in Syria have a way of breaking down.

It is hard to see how this ceasefire agreement will be any difference.

2. The ceasefire will most likely intensify the humanitarian crisis.

The security corridor cuts across Idlib, further hemming in those still in opposition-held parts of the province. Displaced families already have few places to run. Turkey to the north has closed its border. Some have managed to flee to Kurdish-controlled territory to the east. And many fear for their prospects in government-controlled territory.

In other words, families who had few options yesterday, have even fewer today.

This week, we began mobilizing to move our mobile hospital into Idlib, close to the frontlines—and crucially, close to where families are fleeing. While uncertain and impossible to predict with certainty at this point, it’s possible the latest developments could actually increase the number of people moving toward the area where our mobile hospital will operate.

In any case, the need in Idlib is real. It’s massive. And it’s not going away.

Continue standing with the people of Idlib. In addition to our mobile hospital, we’re rushing winter bedrolls to those fleeing in the direction of Manbij, northeast of Idlib. And we are continuing to look for more ways to show up for our friends on the run. Join us.