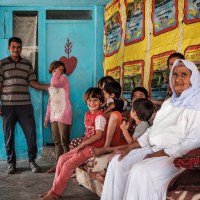 “I still think that being forced to leave your home out of fear is one of the worst injustices a human being can face.”

—Nadia Murad, Yazidi Nobel Peace Prize laureate, from her book The Last Girl: My Story of Captivity, and My Fight Against the Islamic State

War destroys lives. All across Iraq, millions have experienced devastating loss and displacement from the wars that have wracked this country for decades. In the war with ISIS that shook the entire region, the Yazidi people have suffered the most.

Heavily persecuted by the group whose acronym is synonymous with terrible brutality, they were the victims of a genocidal campaign that displaced more than 400,000 people.

Related: Is There Any Hope After Genocide?

Qasim is a Yazidi. He and his family were forced to flee up Sinjar mountain with nothing when ISIS arrived on that fateful night, destroying their towns around their sacred mountain, intending to put an end to his people.

His wife and children made it up the mountain, where they and thousands of others from their community suffered in the scorching heat of summer with no food, water, or shelter. Qasim’s father was too frail to make the journey, so Qasim found a hiding place for him and his father to hunker down, and prayed for their survival.

ISIS came. They found and killed his father.

For Qasim, who miraculously escaped detection, that was the first of many years of suffering. He made it to the top of Sinjar mountain and found his family, not knowing what fate would find them all. When they were finally rescued after surviving eternal days of thirst and hunger, they made their way to a camp for displaced families, where they have been since.

“Sometimes we sleep without eating dinner because there is not enough food.”

When we speak with Qasim, the heaviness of his speech belies deep despair. Life is extremely tough on the survivors of war—especially the Yazidis, who are suffering severe mental crises in large numbers—but it’s really, really hard for some.

Qasim provides for a large family: his mother, his wife, and their 13 children. Four of their kids are mentally disabled, and his eldest daughter is bowed under the weight of her own trauma.

Since they’ve been at camp, the family has not received much assistance. They’ve managed to claim only two grants in the five years they’ve been in the camp. Various aid groups have come in promising help which never materialized.

Qasim takes on what manual labor jobs he can find, as many men do in camp. But opportunities for work are scarce in this camp of well over 10,000 people, and there is never enough work for all the ready hands that need it. And no job means no food. Hunger is something that Qasim and his family are too familiar with.

This year, in the midst of despair, you showed up… with sheep!

You donated enough to get Qasim six pregnant sheep. When we spoke to him last, 3 of those sheep had given birth, and Qasim is so excited.

He proudly told us that his whole family is very busy with the new lambs.

These lambs, and the others waiting to be born, will be a boon for the family. Qasim’s flock will have doubled, and he will sell a number of lambs for income, and then use sheep’s milk to feed his family, drinking the milk or turning it to yogurt, with any surpluses made available to sell.

Qasim had kept a flock with his father when they still lived in Sinjar, so this is a trade that suits him well. He knows about the business of being a shepherd, and having sheep will allow him to feed his big family, and make an income at the same time. The daily necessity of tending to his flock is also good work for hands that were empty and despairing for so long.

The road to rebuilding after war is a long and rough one. For Qasim and too many other Yazidi families, going back to their homes around Sinjar, half a decade after they were displaced, is still not an option.

Essential services like electricity and water are still not available. Some towns haven’t been cleared from unexploded land mines, different militia groups are vying for their control, and the villages and towns around Sinjar mountain are once again under attack in the ongoing Turkish incursions.

Whether they will ever be able to go back to their ancestral homeland and practice their religion in peace, is a question which no one knows the answer to. But for Qasim’s family and so many others like them, you give them the tools and ability to make today better, and set into motion the work of returning or rebuilding home wherever they are.