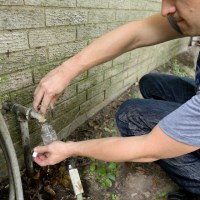 “The water dripped on me and look what happened.”

There was a red welt on my colleague’s arm where the water splashed him. Our team was out collecting water samples in an unincorporated neighborhood near Houston to test for contaminants. But based on the angry rash on Ben’s arm we didn’t need to wait for the results on this house.

I have no idea what kind of contaminants may have caused a reaction like that, but the fact that whatever-it-was came pouring out of the faucet at Jenny’s house made my chest ache with sadness and anger. She’s got kids.

During our first visit here, families told us stories about bad-smelling and/or brown water. They said the flood water made their septic tanks overflow into their wells, so we were pretty sure that there was a significant number of homes without clean water. We just didn’t realize how bad it really was. And we didn’t realize how many families were affected.

The county was aware that there might be contaminated water in some areas, so they made free water testing available to everyone. But no one in this neighborhood had done it yet because the process of collecting the samples presented a lot of barriers for them. For example:

For all these reasons, our team was out collecting samples on behalf of these families to see how bad their water really was. We got the results a couple days later: more than half of the samples we collected came back positive for E. Coli and total coliforms—a sciencey term for dirt and human fecal matter.

You guys, they have sh*t in their water.

I know that word is offensive to many, even partially bleeped out. But I want you to feel the weight of what these families are dealing with. I want you to get angry. This is not clinical. These are real people. This is a baby whose parents are unaware of the problem and the danger it poses to her as they mix her formula with that water. And this is happening right now. In the United States. In Texas. Ten minutes from the Houston airport. Not in some faraway place that you can’t get to.

Thankfully, you’re already showing up to do something about it.

You’re delivering case after case of clean water for these families. Not once, not twice, but over and over again until they have clean water.

You’re translating the official county fliers into Spanish and distributing them house by house, warning families not to drink their contaminated water.

You’re providing chemicals and instructions for how to sanitize their wells, also in Spanish.

You’re continuing to test water in the neighborhood to make sure every family is safe.

You’re working with a plumber to pump out septic tanks to prevent further contamination and make sure families also have access to working toilets.

You’re calling the county (over and over and over again) to advocate for these families. To make sure their garbage is picked up, see what resources are available to them, and shine a light on an area of greater Houston that is often overlooked. This neighborhood wasn’t even included on the list of potentially contaminated areas until we called… they were literally forgotten about.

Going where no one else goes to love the people no one else will love—it doesn’t just mean dodging bullets and providing food for starving families in the Middle East. Sometimes it means dealing with toxic, contaminated water right here in the U.S.

Thank you for being the kind of people willing to get your hands dirty to help the ones who need it most. The ones without papers, transportation, clean water, sanitation, or representation.

Thank you for loving those no one else will love.