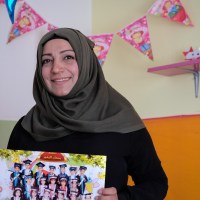 Suhad takes a pint-sized costume out of a plastic package and passes it around our circle.

“HEAVY WORK” is spelled out in black caps on a small shirt, paired with a reflective yellow vest and plastic hard hat. It’s impossible not to break into a wide smile while holding this tiny construction worker outfit.

There are more costumes stored neatly in a classroom downstairs—firefighters, traffic officers, construction workers, engineers, doctors, and more. The students at Suhad’s daycare, 5 years old and far too experienced in war and displacement, have a chance to act out positive roles and hopes for the future.

They learn that everyone has an important role in helping society, each other, and their families.

Suhad and two of her colleagues designed this daycare in Fallujah, Iraq, to be unique—and you helped them make that happen.

From the moment we walked through the gate into the preschool space, we could feel a lightness. The front yard is filled with brightly coloured play structures, a small trampoline, and fun characters painted onto the garden walls. Everything about it is welcoming.

It’s a sharp contrast to the Fallujah many of us have heard about and seen over the years. The Fallujah where 70% of the buildings were destroyed after the US-led invasion.

The Fallujah where the insurgency took root.

Where US munitions made from depleted uranium poisoned the earth—and, many believe, its children.

Where ISIS gained a foothold and held an entire city hostage for two-and-a-half years.

“I need to help the children,” Suhad says. “I need to remove the idea of ISIS and displacement, and refresh their minds toward the future and to have hope.”

She’s worked hard to make a beautiful space where that can happen.

Suhad starts with the needs of her students and designs activities and experiences to meet those needs.

Three of her first students didn’t even speak. Their parents worked, and they spent a lot of time alone at home. Suhad and her colleagues put extra effort into working with these children. Now they have begun to speak, and their parents are thrilled.

One of her students had behavioral issues at home. Unable to process his feelings well, he turned to burning shoes and other items. He had a hard time integrating with the rest of the class. Slowly over time, as Suhad and the other teachers  worked with him, he was able to be with the class. His behavior at home changed, too.

Young children are often incredibly resilient. But the impact of war and displacement rattles even the most grounded kids.

Suhad knows this from personal experience. When ISIS stormed her city of Fallujah in 2014, she and her children were displaced too, for three years. Her husband of 20 years was killed in an accident driving between cities. Suhad was left with three boys and three girls to raise, and to provide for their needs.

Suhad dreamed of opening a preschool long before she was displaced, long before her husband died. But his death gave her a true sense of urgency.

“My dream is to have a unique preschool in Fallujah, and I want to develop it be a big and unique one” in the region.

Suhad and her colleagues are well on their way to making that happen. Their sharp focus on what each student needs is what leads them forward.

I need to remove the idea of ISIS… and refresh their minds toward the future.
—Suhad, preschool teacher

When Suhad recognized that one of her students had an issue with fire, she invited someone from civil defence to speak to all the students at the preschool. He spoke about avoiding dangers with fire, not setting fires, and so on. He gave safety lessons, and together the students practiced how to respond to danger.

This might be standard fare in schools where you live, but it’s pretty cutting edge here in Iraq. The students responded so well to the first visit, that more professionals were invited to speak with the children.

A traffic officer spoke to them about being safe on the streets and sidewalks. Someone from an organization that defuses landmines spoke about the dangers of empty buildings and what kinds of items might be unsafe to touch. (ISIS left behind several improvised explosives—often hidden in things children are most likely to pick up—in former strongholds like Fallujah.)

When Suhad and her colleagues opened the preschool last November, they began with seven students. Now they have 100 students enrolled (though they were on their Ramadan break during our visit).

Of those 100 students, 20 are orphans. They come to preschool for free. She knows how hard life is for them, and this is one thing she could do to make their lives a little easier.

Suhad is committed to making Iraq a safer place by healing the hearts of children before they go to school. She helps them to imagine a more beautiful world. She gives them the opportunity to act like the professionals they could one day become. Suhad is healing her city one young child at a time.

And you are helping to make it happen.