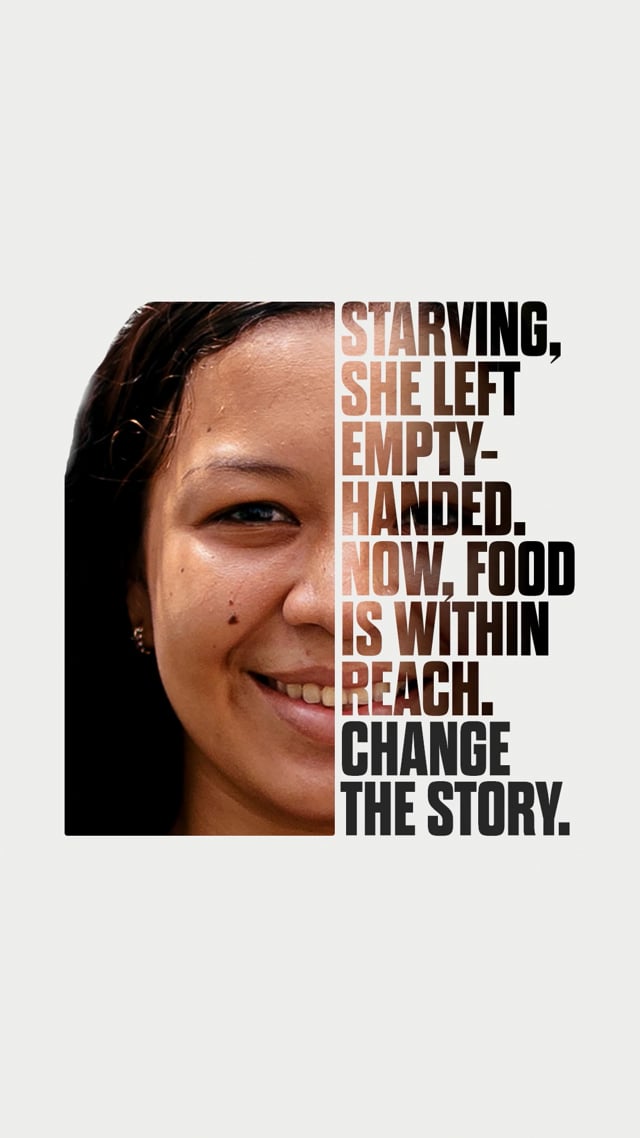 Esmeralda* pushes her shopping cart down an aisle in a grocery store as her toddler son sits beside a bag of diapers half his size, enjoying the ride. There are two cartons of milk, a bag of rice, some flour, and cooking oil–all the essentials. It has been years since Esmeralda’s been able to buy this much food all at once.

Esmeralda is from Venezuela, where economic devastation has caused more than 7 million people to flee–more than any other country not at war and second only to Syria. Companies are leaving the country, and fuel shortages abound, causing unemployment to skyrocket. Money devalues frequently, making the local currency virtually worthless and the cost of food out of reach for most people. Esmeralda experienced acute hunger firsthand. Some days, she and her siblings went without eating, and at other times, they had only one meal for the entire day. Esmeralda’s partner Alberto* recalls seeing people so hungry, they were eating out of the garbage in the streets.

Unemployed and frustrated that she could not help her mother, Esmeralda decided to leave. She was only 19. She didn’t tell her family, calling them only after her bus had departed. During her migration journey, she met Alberto, and together they settled in Ecuador, where they had their son. For a short time, they had stability because they had enough food. But after the pandemic, there was more unemployment, and food was harder to come by. They worried about their son, who was too young to understand why there sometimes wasn’t anything to eat.

Esmeralda and Alberto decided to migrate to the US, where they dreamed of having jobs that would provide enough food for their son, give him a good education, and allow them to live a peaceful life. Leaving was a difficult decision to make. As Esmeralda says wisely, “Every migration requires adaptation to new cultural customs. [Migration is a] radical change you give to your life.”

The journey from El Salvador to the US-Mexico border is complicated and dangerous, made more so by having to cross the Darien Gap, 60 miles of roadless, mountainous rainforests connecting Colombia to Panama. Flash flooding rivers, drugs and arms traffickers, and wild animals are some of the perils migrants face as they travel through it. Not everyone survives. Esmeralda remembers crossing a river that had a strong current as her scariest moment. Their child “was knocked down by a person, and the child remained hanging on him. Let’s say that that was a traumatic moment for my life…”

Traveling with a two-year-old made the journey that much more complicated. Esmeralda and Alberto had to alternate carrying their son because he “didn’t want to touch the ground.” Besides the physical risks, there were other problems. Esmeralda and Alberto couldn’t afford to pay for a guide during their nine days of walking through the Darien Gap. They met other travelers, but along the way, someone stole their bag where they kept their food. They didn’t have any food for two days. They had to sleep on rocks. Their son cried. Esmeralda said she felt like crying, too, but she didn’t want her son to see her like that. “Being tired, you feel like crying because of the mud and the mountains. You want to go down for a while. You can’t.”

During their two days without food, they got lost in the Darien Gap. They forced themselves up to the top of a mountain to see where they were. Finally, they spotted a mountain pass and made their way down. On the descent, they met a policeman who took them to a small town where people gave them food, allowed them to rest, and when they were ready, showed them to a road. Esmeralda credits her faith in God and her need to get her son out of the jungle as what gave her the strength to keep going.

After crossing into Panama, their journey was still difficult. Esmeralda recounts how “the need to find food, not sleep in the street, to have diapers, to find a way to clean up, eat and sleep was a huge responsibility.”

While crossing Guatemala, they ran out of money. Again, having enough to eat was the top priority. They crossed into southern Mexico, but because they didn’t yet have legal permission to be in Tapachula, they couldn’t work. Finding other types of employment was difficult.

Thanks to our community of peacemakers, having food on their table and diapers for their son is no longer a problem for Esmeralda. With our food voucher program, vulnerable families like Esmeralda’s get to buy the food they like and need.

The process is simple. Recipients are given an amount of money to spend in the form of a voucher. They shop for what they like, as a regular customer would. When they check out, they sign the voucher and leave with their bags of items. The only restriction in the program is that recipients are not allowed to buy alcohol or cigarettes.

Programs like our food voucher program are changing the story of starvation to a story of restoration for families like Esmeralda’s caught in the limbo of migration at the Mexican-Guatemalan border. With your generosity, we can change the story for more people like Esmeralda, people who have left everything and risked their lives for a chance at a better future for their families.

*Not their real names