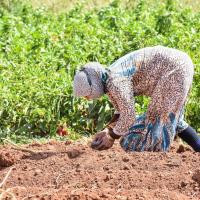 Before there was a war in Syria, before the whole country was plunged into violence, there was a drought.

Three out of every four farms failed. Nearly all the livestock perished. Millions of people lost their only way to earn a living. They lost their only connection to the earth that had nurtured their children for generations.

Syrian families were pushed to the very edge.

But after seven years of war, Syria can be remade. New life will spring from the earth.

And it starts today. A war that began with drought will end with a harvest.

New seeds planted deep into Syrian soil will grow into crops that grow into income for those driven into poverty by war.

This Giving Tuesday, we’re launching a yearlong effort to help Syrian families in Aleppo and Deir ez-Zor—two of the most war-ravaged parts of Syria—come home to their farms and provide for themselves again. To throw off the chains of displacement and dependence.

We’re not just putting band-aids on the wounds of war; we’re tackling one of the root causes of this conflict—so the families we serve will never be left vulnerable again.

We’re digging in to help Syrian families dig out.

When crops grow, when livestock dot their fields again, families have what they need to be well. The threat of war fades. The earth heals. Hope springs from the dirt.

Syrian families know how to farm. It’s handed down through the generations; it’s in their blood. But years of drought and war drove families away from their homes, from their livelihoods. With your help, we’re bringing them back.

Two hundred and fifty families in Aleppo and another 250 in Deir ez-Zor are joining together to form farming co-ops. We’re providing each co-cop with a tractor to plow the fields, along with fuel and wages.

We’re also investing specifically in widows and female-headed households. Families have already met to figure out irrigation and crop rotation, allowing them to individualize their plans according to their own needs and goals— because these families know best what they need and what will work well. For the summer, they will plant heat-tolerant squash and wheat for the winter.

With your help, these women, these families, can again provide for themselves.

Deir ez-Zor in eastern Syria is one of the most overlooked parts of the country. Surrounded by ISIS for almost three years, hardly any aid reaches families here. Roads are shut down frequently because of ongoing security threats.

By providing 250 families with sheep, we can give them what they need to thrive, even when no outside aid can come in. They’ll have food and milk readily available—for themselves or to sell for income. And if ISIS comes back, they’ll be able to move with their animals, keeping their food source intact.

These 250 Deir ez-Zor families will receive five to 10 pregnant sheep, along with vaccinations and food for the animals. In addition, the co-op will receive a few rams, allowing families to grow their flocks—and their source of income—for years to come

For 250 families in the countryside near Aleppo, hope starts with mushrooms. (Yes, mushrooms.)

Mushrooms are not very common in Syria, but they are cheap to grow and don’t require any land, making them a good fit for Aleppo families living where the earth is still strewn with mines. They can they sell the mushrooms they grow, providing income for their families.

It may seem small, but it isn’t. Mushrooms are helping families claim a whole new identity. When asked who he is, one man pulled out his phone and proudly showed us his Facebook profile.

We’re digging in, and we need you to dig in with us. This Giving Tuesday, we’re not just asking you to give once. We’re asking you to give monthly and make a long-term commitment to one family. To dig in and stay until their farm come back to life and their whole family flourishes.

Until they no longer need us. Until the land to which they’re returning provides everything they need to thrive again.

So if you already planned to give today, we’re asking you to take what you were going to gift, divide it by 12, and make it a monthly gift spread across the next year.

If you’re already a monthly donor, we’d be honored if you’d give above and beyond today—and invest in one family and their future.

Dig in for one Syrian family today.