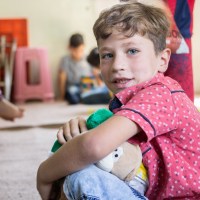 We slow the car to make the left turn off of the paved road, onto the rough gravel entrance to the camp for Syrian refugees. The gate is open, but we stop to get clearance from the armed guard. We start to explain what we are doing today, but with a glance at our windshield logo, the guard waves us through. After all these years of working in this refugee camp, they know us.

We pass the side street that takes us to Jameela’s house, and are reminded of all the women we’ve met with there to start business projects.

As we drive toward the child safe space at the back of the camp, a space dedicated to the protection and well-being of young Syrian refugees, nearly every street is filled with stories for us: women and men who started businesses with your help, countless cups of tea and snuggles with babies, tears shed listening to stories of profound loss and tender hope.

In much of the world, passports are required to travel outside your country’s borders. For Syrians in the midst of war, many of whom never owned a passport, the options for leaving the country legally and on their own terms are few.

For Syrians who are ethnically Kurdish, options are even more limited. Starting in 1962, the Syrian government stripped most of the Kurdish population of their citizenship and denied them identity cards—essentials for access to basic services like health care, education… and passports.

Many Syrian Kurds who fled war came to the Kurdish part of Iraq, seeking refuge. It was one place they could travel without a passport; their shared language and customs gained them access.

Those who came to Iraq in the early days of the Syrian war were able to move into communities—renting houses, finding jobs, and slowly carving out lives for themselves.

But the war with ISIS changed everything. Three million Iraqis were quickly displaced within their own country, putting even more strain on an already fragile country.

Cities in the Kurdish region of Iraq were transformed overnight. Vacant houses and apartments were rented by those who arrived first with ready cash. Next, the hotel rooms filled up. Then desperate families with fewer options sought shelter in abandoned or half-built structures, most offering little but a roof over their heads.

Main roads in city centers were packed with cars carrying people and their personal belongings, bewildered expressions visible through the windshields.

At the same time, the war in Syria began heating up, displacing far more families than it had in the early years. Syrian Kurds who fled to Kurdistan were still welcomed, but the situation in Iraq had changed since the first families came.

Vacant properties were now scarce, the economy had tanked, and the local government needed to be sure that refugees coming from Syria were legitimate, and not a threat to local residents.

Syrian families were directed immediately to these hastily built shelters, then known as transit camps, because it was thought that most Syrian families would be there just a short time.

Those who lived in Houston during Hurricane Katrina might have a sense of what it was like for residents of the largest Kurdish cities in Iraq during the mass influx of displaced families.

Thousands of people pitched in to make the best of a terrible situation, but at the time, no one had any sense just how many families who fled New Orleans would never make it back.

There was a need for crisis response in the early days, yes! But there was soon a need to reckon with the long-term impact of the disaster, too.

The original transit camp for Syrian refugees (shown above) was set up quickly in a farmer’s field, a half-hour away from the nearest major city in northern Iraq. It provided emergency shelter, but as soon as the rainy season came, it turned into a giant pit of mud dotted with tents.

So the UN and local government officials set about creating a new camp, a refugee camp a little way down the road that would serve longer-term needs of fleeing families.

Organized is the word that came to mind the first time I drove through the gates of this refugee camp, shortly after it opened.

You can tell from the grid pattern of the streets that they had time to lay out this camp with some care. Unlike the nearby transit camp, this one was designed knowing that its residents would be here a while.

The earliest plans for the long-term camp carved out spaces for things a community of 9,000 people need: small police and fire stations, a distribution area for food, primary schools, and a health clinic. There was a system for water distribution in each neighborhood, where residents walked with their buckets to get water from a tank. A few hours of electricity was provided each day by the local government.

When the camp first opened, it provided the essentials—there was no time or money for frills.

One of those essential services designed into the camp from the beginning was a safe space for kids to help care for the emotional and developmental needs of children and provide support for their families.

Then they are moved to a strange place filled with strange people, surrounded by a razor wire topped fence. Children feel the stress of their families, but haven’t yet developed the emotional capacity or language to process the fears they carry.

These traumas experienced in childhood can continue to wound for a lifetime. But they don’t have to.

Intervention in the form of therapeutic art, games, and sports can provide children a chance to be children, even as they work through their fears and grief.

The international community recognizes that this need is every bit as essential as shelter, food, and water.

The camp has evolved in the five years since it opened. A majority of families, knowing it will be years before they can return to Syria, have renovated their homes in the camp—small concrete block houses provide shelter now instead of tents.

Water comes to each property, unlike in the early days of the camp. Electricity is more plentiful, though still expensive. Sewers take away waste water, and soon the streets inside the camp will be paved. Families who can afford it decorate their homes with paint and tile to make them feel like homes.

It looks like a town now. If it weren’t for the armed guards and large aid agency stencils painted on virtually every surface, it would be hard to know that this community started as a camp.

But many of the large agencies who provided emergency aid in the early days of the crisis have pulled out. They ended funding and program support, and moved on to other crises in other places.

This camp has developed the veneer of normalcy, but we know from the countless hours we spend in conversation with camp residents, there are still acute needs—especially for children.

Staff at the camp’s child safe space know this too well.

Ever since the original transit camp opened at the very beginning of the refugee crisis, they’ve provided psychosocial activities to help children process their trauma and concerns. They also provide activities that allow kids to be kids.

Years ago, when our friends at the child safe space recognized that poverty was a significant stressor for the children they served, they asked if we could help provide income and support for some of the most vulnerable families. They don’t have the capacity or expertise to support families in this way, but we do—and we were able to fill this gap.

Many of our early small business startups, many of the craftswomen who create knits for our shop, and the students at our first WorkWell tech space—they came out of our relationship with this child safe space and our shared desire to support families here.

Poverty, however, is just one small slice of life children living in the refugee camp. Trauma is still fresh for so many of them, and the pressures of life as a refugee pile on more.

The youngest children in the camp have either never seen or do not remember their homeland. They are growing up as guests in a land that is not theirs, without the security that citizenship brings.

The older children sometimes feel pressured to marry too young, to take some of the burden of responsibility off their parents. And the mothers of these children need a safe space to be with each other, just to take the pressure off for a little while.

That’s what this child safe space has provided from the beginning.

But the large international organization that funded the child safe space until now has withdrawn their funding, and it is in danger of closing its doors.

Give today to keep the doors of this safe space for children open, so that kids can heal from the trauma of war and just be kids again.

I want to give to a safe space for children.