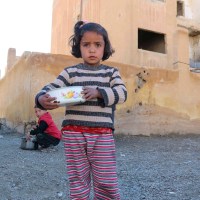 Can I ask you an honest question? Why are you here, right now, reading this? Why have you chosen to spend time with us in this digital space?

Typically, when we ask people this, they say that our stories help them feel connected to real people around the world and reminds them that we aren’t as separate as we’re conditioned to believe.

The current global political climate tells us to fear and mistrust one another, online ‘social’ media divides us with algorithms and a false sense of connection, economic systems encourage growth at the expense of others, products are delivered to our doorstep so we don’t have to look into anyone’s eyes, and even many religious traditions reinforce a simplistic “us vs them” view of the world—it’s no wonder we all feel so separate!

So in this space, one of the most important things we can do is look into people’s eyes and feel a sense of real, human connection. We’re here to spur one another on, to offer encouragement and remind each other that the world is out there, and it’s worth remaking.

So today, let’s into the eyes of real people you’re serving in Syria, starting with Fadia. 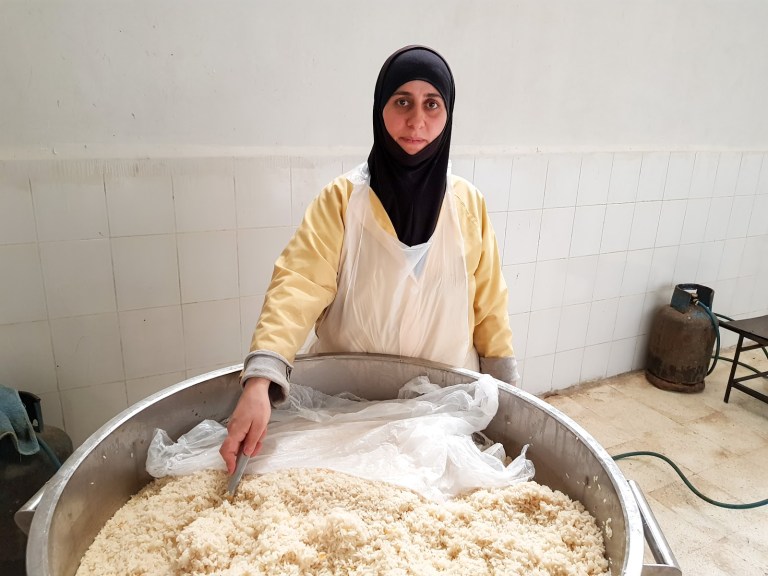 Fadia is from a little wartorn town in east Damascus called Hamoriya, but now she lives in a shelter you’re supporting.

She cried as she shared her devastation—how the family couldn’t sleep from hunger and she didn’t know what she’d feed her son in the morning. Pain upon pain. She told us there were moments when she hoped her son would just die so his pain and hunger could end—a bitter mercy to end their suffering.

“The day we left Hamoriya and came to the shelter was a day from heaven,” she told us.

After escaping her home with her husband and son, Fadia decided to apply for a job at this shelter.

When many people cook, they probably don’t think much of it.

“Hopefully it isn’t burned or too salty.”

“Hopefully I can get my kids to eat it.”

When Fadia cooks, she cooks knowing what it’s like to starve—and to watch her own child starve. So she cooks as a matter of life and death. She serves her fellow Syrians as a way to both support her own family and make sure other people have the options she didn’t.

You are helping make this possible today, and we can’t thank you enough!

Mahmood has work, something to put his hands to, and when you haven’t had purposeful work in awhile, it’s hard to express just how important that is.

He is glad to help out in the shelter kitchen—a project you’re helping support for families fleeing from Douma, the area of the alleged chemical gas attacks. Mahmood escaped and found our shelter where he applied for a job to support his wife, parents, and four children.

He told us the work makes him happy because it allows him to help feed his relatives and neighbors who went through such terrible experiences in their village. But he also let us know that, while things are improving, his family is still struggling. Each person only has one set of clothes, which they wash each evening to re-wear the next day. 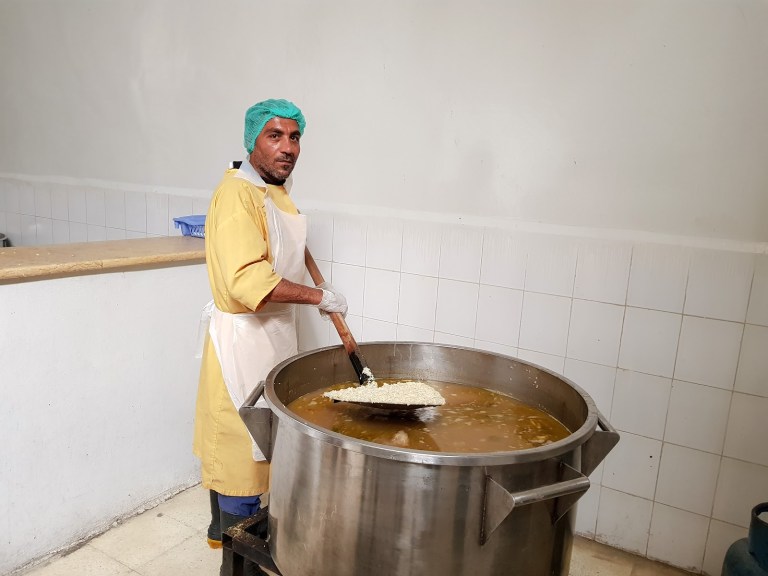 This is Nabeel, another man who escaped the fighting with his family and found safety in the shelter you’re helping support.

Things took a dark turn when extremist militias took control of Nabeel’s village, and he and his family are still recovering from the nightmare. His brother was shot in cold blood when he refused to join an Al Qaeda-linked militia, and the rest of the family was deprived of food and regularly pressured into joining extremists.

You’ve seen young men on the news or in horrifying ISIS propaganda videos who did join the extremists—well this is Nabeel, he didn’t join them, and it cost him.

“People were insulted and forced to live like animals,” Nabeel told us. Local militias increased the price of goods in Nabeel’s village, making life more difficult for the people. Nabeel even had to sell his house just to afford food so the family didn’t starve.

Thankfully, Nabeel told us he is much happier than he has been in a long time. He said he feels productive, his self-esteem is up, and he feels safe and secure now that he escaped Ghouta and has work.

“I only have one child and I couldn’t provide for him. I really wonder how people with five or more children managed.”

These three people are just a few of the thousands you’re helping in Syria right now. We wish we could introduce you to each and every one of them. We wish you could look into their eyes, shake their hand, and share a meal with them.

The truth is that we are deeply connected to these men and women and children in our shared humanity. We hope you feel that connection today and that it encourages you, inspires you, and moves you to love them more deeply.

Show up and provide for your displaced brothers and sisters in Syria. Give now.

I want to give to Syrian families.