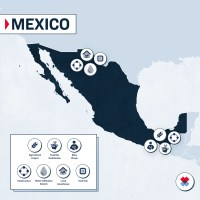 Mexico limped into 2021, its economy having contracted by 8.5% in 2020. COVID-19 was still raging, hurting workers in the informal economy, especially women and youth. Throughout 2021, inflation rose to 7.36%, the highest in 20 years.

Despite these challenges, Mexico’s 2021 singular story is migration. Last year, Mexico received more than 131,000 asylum applications, the third-most in the world. This number does not include internally displaced persons (IDPs), Mexicans forced to leave their homes, communities, and livelihoods due to natural disasters, conflict, and violence. By the end of 2021, there were 379,246 IDPs in Mexico.

Along the migration route and near the US-Mexico border, cartel members prey on migrants, kidnapping, raping, or extorting them for profit.

Our relief efforts were concentrated in key cities at Mexico’s northern and southern borders to best serve our migrant friends. Our community of peacemakers’ generosity allowed us to respond in the following ways:

At the US-Mexico border

Migrants fleeing community-destroying violence, poverty, and natural disasters encounter traffickers, threats of sexual violence/kidnapping, and theft en route to safety. At borders and other points of entry, they lack access to food, shelter, jobs, and education while encountering more violence.

Although official policy restricts Customs and Border Patrol (CBP) from expelling migrants back to Mexico after dark, some border patrol guards ignore this policy. Often, migrants are attacked as they make their way to a shelter.

Kidnappers affiliated with drug cartels wait near the bridges where CBP officers leave removed migrants. If migrants do not know the correct password, they are kidnapped so the cartels can extort their families in the US for money. If no one pays, they are killed, enslaved, or disappeared.

Between January 6, 2021, and March 15, 2022, 9,886 victims were kidnapped, raped, tortured, or violently attacked after being expelled or blocked at a port of entry along the US-Mexico border.

Migration Protection Protocols (MPP) dictate that migrants seeking asylum in the US have to wait in Mexico until they have their court dates.  MPP puts migrants in danger because drug cartels control border towns and the areas around them. Smugglers are affiliated with the cartels. Those who try to cross without paying a fee are beaten or kidnapped. By smuggling people into the US, smugglers make more money, thereby increasing a cartel’s power. 55% of migrants hire a smuggler to reach their final destination.

MPP also causes bottlenecks for migrants at ports of entry. Shelters become overcrowded, vulnerable families don’t have enough food or clean water, and children miss out on school. Entire families sleep unhoused, in homemade lean-tos made of sheets held up by wooden poles or in parks or public squares, where women and children sleep close to the center to avoid being kidnapped.  When in-need people are turned away, they are not given a specific date or time to return for a hearing. They are caught in a limbo of endless waiting, often without access to essential services.

A 1980 US immigration law states that a port of entry is where a migrant seeking asylum should present him/her/themself. Title 42 allows border patrol to deny entry to people if they have traveled from a country with a communicable disease. Citing the need to stop the spread of COVID-19, CBP expelled migrants at the border before they had a chance to file their asylum claims. They are expelled to the country from which they entered (usually Mexico) or in some cases, to their country of origin. When Title 42 was applied to Haitian migrants waiting under the Del Rio Bridge in September 2021, some Haitians were expelled back to Haiti even though they had legal status in countries such as Brazil or Chile. Some were expelled with their children who held Chilean or Brazilian passports. These children were left stateless.