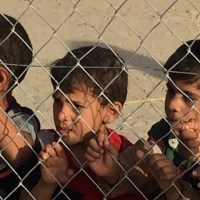 No one imagines a refugee camp as a pleasant or easy place to live. But it would be nice to think that once a family has made it into one of these camps, they are safe. However uncertain their future, for now, at least, they’re out of immediate danger. Their needs are met.

It would be nice to think the sight of a UN logo emblazoned on the outside of a refugee tent meant this camp was safe and well supplied.

It’d be nice to think that. But “nice” and “reality” don’t always line up so neatly, especially for the thousands of families who have fled Fallujah in recent days.

Today is World Refugee Day, and it is being marked by the news that the global refugee population has reached an unprecedented 65 million. Thousands more have been added to that number in Fallujah over the past few days, as Iraqi forces moved into the heart of the city, repelling ISIS militants who have held the area for more than two years.

Over 82,000 people have fled since the operation to liberate Fallujah started. They began this battle as human shields—pawns of ISIS, who threatened to kill anyone trying to leave. Then, as ISIS suddenly withdrew over the weekend, families were able to flee, walking in the searing desert heat in search of some semblance of safety.

On Saturday, the Iraqi government declared victory, even as the military continued to encounter pockets of resistance. But for 82,000 displaced children, mothers, and fathers, it does not feel like victory yet.

For them, it feels like a fresh hell has replaced the old one.

Displacement camps are struggling to keep pace with the need. New camps cannot be established or equipped quickly enough. As one news outlet reported, the crisis is “swamping the resources of foreign aid groups and the government as they struggle with funding shortfalls.”

“Contingency stocks are nearly depleted,” the UN announced today. “With rising temperatures and lack of shade and clean drinking water, outbreaks of communicable diseases are likely.”

Even for those accustomed to seeing the plight of displaced families up close, the crisis in Fallujah defies comprehension. Earlier today, a Washington Post journalist accompanied our convoy to a displacement camp west of the city. “In 4 1/2 years covering Syria and Iraq,” she wrote on Twitter, “I’ve never seen conditions this bad. No tents. No water. No words.”

In 4 1/2 years covering Syria and Iraq I've never seen conditions this bad. No tents. No water. No words. #Fallujah pic.twitter.com/2sbevjr9xn

On World Refugee Day, it’s important we remember that most families who flee violence will never make it outside their own country. Of the 65 million forcibly displaced people in our world, nearly two thirds of them, 40.8 million, are displaced within their country of origin.

Fallujah’s families will never make it more than a few miles from their battle-scarred city. They will not cross the Mediterranean with hopes of reaching Europe. They will not be given asylum in the United States. Most can’t even take refuge in Baghdad, less than 40 miles away, or in the relative safety of Iraqi Kurdistan to the north.

Apart from the handful of journalists who have accompanied our aid convoys, few have able to access the area around Fallujah in order to share their stories with the world.

Which is why we must continue telling their story—on World Refugee Day and every other day.

It’s why we will keep responding with everything we have. It’s why we keep going back to meet families’ most basic needs—food, water, cooking stoves. It’s why we’ll keep showing up for them—in the camps and in Fallujah, as they seek to unmake the violence that has devastated their city.

And it’s why we need you to keep going with us.

The needs of 65 million refugees globally far outpace what the world has given. In the face of such an overwhelming number, it’s easy to say “too big.” The problem is too great, too insurmountable. But we’ve seen what can happen when you show up in the hardest places. We’ve seen what hope looks like, rekindled in the eyes of a refugee.

We’ve seen what is possible when you say “too small.” And then, instead of pulling back, you lean in more. You give more. You love more.

This World Refugee Day, let the displaced children of Fallujah feel your love.