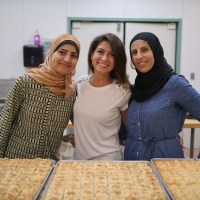 It’s the thread that connects us all—whatever we believe, wherever we are from, the different stories that shaped us. Food is woven into our memories, into our family heritage. It is part of comfort and celebration, a way to show love and a way to provide for others.

This is true the world over, but especially in the Middle East, where so much of daily life and connection centers around food.

“Everything we do involves food,” says Christa Tawil, founder of Zaytouna Foods.

Christa came to the US from Syria in 2012. But she is quick to recognize her experience as a refugee is a little different. She came by tourist visa, spoke English, and attended an American university.

When Christa arrived in Miami, Florida, she saw the struggle other Syrian refugees had to navigate. They arrived via the UN refugee resettlement program and faced not just one but two language barriers—they needed to know both English and Spanish to navigate Miami well.

Her dishes are authentically Syrian, using fresh foods and traditional-style dishes. Christa says the recipes come from her grandma, dishes that taste comforting, that taste like home.

“While you cook, you create relationships and make a family.”

Before the war, Syria was a largely agricultural society, its food based on what was in season at the time. Christa fondly remembers meals at her grandma’s house that happened only once a year, when a certain fruit was ripe or a favorite vegetable was harvested.

“Foods were special at their time. And it was always fresh,” she said.

“Food is a laborious and lengthy process. It’s teamwork. While you cook, you create relationships and make a family,” says Christa. She’s seen this among her employees—women who came from different parts of Syria but now have found a sisterhood, a community.

Zaytouna doesn’t just forge relationships among refugee women; it creates interfaith connections, too. Christa, a Christian, works closely with her cooks, who are Muslim. And all of Zaytouna’s recipes are produced in a kitchen donated by Chefs Aaron Dreilinger and David Schwadron, who are Jewish.

“We have no reason to be around a table together,” Christa points out. “But we come together and it’s so beautiful.”

“Zaytouna exists for these women, and vice versa. We have a Middle Eastern saying: one hand can’t clap alone. That is Zaytouna and the women.”

What’s true in Zaytouna’s kitchen is true in her home country of Syria. War and drought have decimated the once-vibrant farms here. Many families—who’ve farmed these lands for generations—desperately wish to go back.

But one hand can’t clap alone. They need your help to become farmers again, to return to their fields and grow the food that can feed the people who rebuild a whole country.

We can celebrate hardworking Syrians like Christa, and we can follow her lead in giving displaced Syrians a vital part of their identity back. We can restore Syria to its agricultural roots.

We can give families what they need to grow zucchini and tomatoes, lentils and wheat, to become farmers again. So an entire country can rise from the fragments of war, so it can be the beautiful, vibrant, peaceful country it truly is.