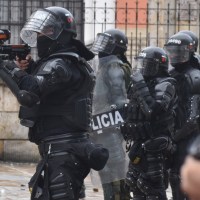 Out of One Crisis and Into Another

Families fleeing hunger in Venezuela face a new threat in neighboring Colombia. We are here to meet them.

Is there a good place to change a baby’s diaper on the litter-strewn side of a busy mountain road? No, not really. But these Venezuelan moms do their best each time they stop to give their kids a chance to rest their legs. They are hours into what will be a days-long walk—or longer. They are tired, nervous, and yet somehow hopeful they will find a safe place to land in neighboring Colombia.

For so many Venezuelan families, it has become impossible to stay home. Hunger and hopelessness drive them to take huge risks, just for the chance to earn enough money to feed their families. But Colombia is exploding in a crisis of its own, and Venezuelan migrants–moms and dads–will have a hard time finding what they need.

Venezuela used to be the wealthiest country in South America. Home to the world’s largest oil reserves in an oil-dependant world, it should be in the perfect position to take care of its people well. But any economy based on a single industry is doomed from the start. A series of crashes in the price of oil beginning in the 1980’s, along with internal political turmoil, and international sanctions has left the country’s economy in tatters.

Inflation rises so quickly in Venezuela, new currency is created to avoid the need to carry sacks of cash to purchase a carton of eggs. The situation is so bad that between 2016 and April 2019, the overall inflation rate rose to 53,798,500%. The basic monthly minimum wage was recently raised nearly 300%, which sounds helpful at first glance. But the new monthly rate of $2.40 is hardly enough to buy a litre of milk.

When we visit families in northwest Venezuela to see how they are managing the situation, the hunger crisis is so bad, we have to come up with new ways to measure it. Instead of counting how many meals a day kids here miss, we have to count how many days they go without anything at all. In areas where we are distributing month-long food packs to families, 75% of families go hungry.

When you have children, doing nothing isn’t an option. Many families become incredibly creative in stretching small amounts of food, to try to hang on at home. But more than five and a half million Venezuelans have left the country in hopes of earning a living elsewhere. The families we’re meeting on the sides of the road—they’re adding to that number.

By the end of 2020, Colombia was playing host to 1.7 million Venezuelans. For a time it was a convenient option for those Venezuelans starving at home: better chances for work, a currency that still retained its value, a shared language, and even a shot at official residency status for those who were already in the country before the end of January this year.

But just like so many other countries that suffered an economic downturn during 2020 and the covid pandemic, Colombia saw a sharp rise in poverty levels. In fact, as much as 42% of Colombians now experience severe poverty. In an effort to put economic reforms in place to make up budget shortfalls, the government introduced a series of changes to the tax system, which would largely impact middle and lower income families.

You could say the Colombian government failed to read the room. Sparked by what was widely seen as unfair demands from the government when they were at their most vulnerable, tens of thousands of Colombians took to the streets in what have largely been peaceful protests. Protests started because of the promise of new taxes (the government has shelved those plans because of the outcry) but have since spread to cities across the country as residents find the courage to air a long list of grievances.

Protestors are calling out economic inequality, police brutality, renewed covid lock-downs (and a poor national response to the virus), poor health and education systems, and a failure to follow through with terms of a peace treaty negotiated with guerrillas after a long war centered in the drug trade.

Where Venezuelans used to look to Colombian cities for opportunity, they now see the streets filled with angry citizens, and police responding with violence.

When turmoil erupts, it’s natural to look for who is responsible. For protestors in Colombia, they’re pointing fingers at their government. The government, on the other hand, isn’t eager to accept that blame. They are pointing to others: fringe groups, “armed groups”, and the small numbers of Venezuelans who have joined protests.

When the economy is healthy, it’s easy for a country to welcome a couple million struggling neighbors. But in the midst of an economic crisis? It’s far easier to blame “the other” for difficult realities. Continued blame could quickly increase targeting Venezuelans in Colombia with violence.

And this is after Venezuelan families have already faced the dangerous experience of crossing the Colombian border, closed for more than a year because of covid, through irregular means. At the best of times, migrants face extortion, exploitation, physical and sexual violence when they cross the border at unoffical crossing points called trocha. Then there is the practical danger of crossing a border made up of a river—recently two children and their grandfather drowned while attempting to cross into Colombia to buy groceries. Now, there is the growing risk of inadvertently walking through a battle between the Venezuelan military and armed Colombian guerilla groups.

For Venezuelans fleeing into Colombia’s current state of chaos—no one makes this choice lightly.

We are out on the road, meeting families right where they are–Venezuelan moms, dads, and kids–walking between the border and Colombian cities. We know the conditions they’re exposed to, and the challenges they face keeping children healthy while traveling so far. We’re preparing to assemble emergency kits for little ones, with all the supplies needed to look after childrens’ basic needs, packed into little backpacks the children can carry themselves.

We’ll provide for 21-days worth of very real needs, as well as practically showing families that they’re not alone. Soap and shampoo, a toothbrush and toothpaste, antibacterial gel and mosquito repellent, toilet paper and more will be included in these kits. And of course they will include diapers and wipes—it’s never easy to change a baby’s diaper on the side of a mountain road, but at least we can give parents the supplies that they need.

The only thing missing to put these emergency kits into the hands (and on the backs) of our youngest Venezuelan friends is you.