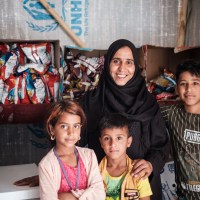 Ikbal runs a grocery store that stocks a little bit of everything: fresh produce, snacks, drinks, and a bunch of other things, depending on what her customers want. She, like the thousands of families in this sprawling displacement camp, was driven out of her hometown by ISIS, who destroyed villages and towns all over Iraq when it swept in to claim its caliphate.

Ikbal lost her husband to a work accident, two years after coming to camp.  It was a further blow to a very difficult situation. Iraqi families traditionally rely on the man of the house to provide for the family, and losing her husband—and her children, their father—meant that Ikbal was now the sole provider for her kids. Back home—north of Baghdad, where her family is from—she’d run a grocery and snack shop. She knows well the business of managing and selling food and drink, and her skills are perfect for a sustainable small business in camp.

Now all she needed was someone to help her get capital to start this business up.

And that’s exactly what you did.

You helped Ikbal get her food and snack shop off the ground in April this year. But a couple of months in, severe disagreements with the neighbors forced her to stop and spend her hard-won profits moving the shop to another part of the camp.

We are privileged to be able to tell many stories of success with the business owners you’ve invested in. But many of the women and men that you’ve given a helping hand, face plenty of struggles in getting their businesses off the ground. The vagaries of life—big and small, bad and good—go on, against the backdrop of destruction that war wreaks. There are supportive neighbors and troublesome ones, mistakes are made, some lead to successes and others don’t. The human spirit persists, in all its flavors.

But the one quality we’ve seen of all our displaced and refugee friends is sheer grit. Already devastated by the utter loss of war, our displaced sisters and brothers respond to some truly disheartening circumstances by picking themselves up, brushing the dust off, and keeping on.

Ikbal had started again from scratch, spending most of her profits building the shop itself and restocking. The new neighborhood was far better. She had agreeable neighbors, and despite seeing a dip in her weekly takings, she was happier running the shop here.

When we went to visit Ikbal a couple of months after she started the store again, the shelves were surprisingly bare for this type of shop, which is typically chock-full of every variety of snack and drink you can think of. But little by little, business was picking up, she said, so she had actually sold most of her stock, and was in the process of getting more. Her hard work was paying off, and she is planning to expand her offerings in the near future.

When you invest in displaced women like Ikbal, it’s so much more than a financial investment. It’s a partnership. You give women like Ikbal the initial capital to get their businesses going, but you also invest in their success: making sure they have support during harder times, and celebrating their achievements.

Partner with our displaced sisters. Give today.