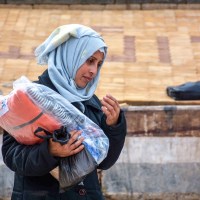 ISIS has only 700 square meters of territory left in Syria as of Saturday, according to US-backed forces. That’s less than the size of two basketball courts.

The fight for these final few yards is grueling, in part because militants hold a large number of civilians as human shields, including the wives and children of ISIS fighters.

So this is it, right? The final and decisive defeat of one of the world’s most feared terror groups?

ISIS has been written off before, and it was one of the biggest foreign policy blunders of our time.

This is not the first time ISIS has been pushed to the brink of defeat and written off as a spent force. Few people realize that ISIS existed long before 2014, the year they swept across Syria and Iraq, seizing huge swaths of territory.

ISIS as we know it began 15 years ago, when a Jordanian extremist named Abu Musab al-Zarqawi pledged his loyalty to Osama bin Laden. His army of extremists, known popularly as al Qaeda in Iraq, inflicted terror and carnage on a massive scale. Eventually, they broke with al Qaeda and changed their name to the Islamic State.

After the US troop surge in late 2006, military forces partnered with Sunni tribal groups in Iraq that had grown weary of Zarqawi’s violence, and together they began to chip away at his power. Zarqawi himself was killed by US bombs in 2006.

By the time US troops began withdrawing from Iraq in 2010, the group that became known as ISIS had almost no territory and just 700 fighters left. Its leadership was decimated by targeted strikes, like the one that took out Zarqawi.

But in the aftermath of the withdrawal led by then-President Obama, ISIS regrouped. In cities like Mosul, they never really disappeared—they simply went underground. And when the moment came, they resurfaced and struck with a vengeance. Their ranks swelled with thousands of new recruits.

Now after years of war, ISIS is down to its last 700 yards in Syria. They still command thousands of fighters—many more than they did nine years ago, the last time they were nearly defeated. Once more, the world is poised to declare a victory it hasn’t earned.

If ISIS regroups as they have before, the people who suffer most will be those living in vulnerable towns and villages across Iraq and Syria—those who’ve already had their lives upended by years of violence.

Thousands of Yazidi women and girls are still missing.

ISIS kidnapped and enslaved several thousand Yazidi women in northwestern Iraq. Long persecuted and marginalized, the Yazidi community arguably suffered more at the hands of ISIS than any other group. They became targets of genocide.

While ISIS has been driven from Yazidi lands, the nightmare is far from over. Most Yazidi families cannot return—either because they aren’t allowed, or because there are still no services like water and electricity, or because they have no homes to return to.

But more than that, their families still aren’t whole. By one estimate, over 1,400 Yazidi women remain unaccounted for.

We serve Yazidi families across Iraq—in their homeland in Sinjar and in the communities to which they fled. They’ve become some of our dearest friends—and we can attest that for them, the nightmare of ISIS is far from over. They have come so far, they have remade so much of what was lost. But how do you remake a family that was torn apart by violence?

It seems trivial to talk of victory when people have lost so much. No victory can be real until these 1,400 women and girls are accounted for—and until as many of them as are still alive can be reunited with their families.

Whole communities once ruled by ISIS are still in ruins.

If you navigate the debris of Mosul’s Old City, you won’t see many aid groups. Most left or scaled back after the fighting died down. You won’t see much investment in rebuilding by the government or the UN, either.

You will see lone individuals and families trying to dig out, confronting a mountain of rubble, armed with little more than a wheelbarrow. You’ll hear fathers lament how the world has forgotten Mosul—how almost two years after ISIS there is still barely any electricity or clean water. You’ll see families trying to make a home of some kind in buildings that may not be structurally sound after all the bombing.

With you, we’re investing in Mosul’s Old City and so many other places devastated by ISIS and now forgotten by the world. We’re opening small businesses where ISIS once ruled with an iron fist. Equipping young women and men with essential tech skills to restart their careers. Establishing permanent medical clinics and bringing new life in places the government hasn’t reached yet. Providing teachers and school supplies so kids can return to school.

Every response is about paving the way home, or helping families make a new home where they live now. But this work is far from over. The world cannot rightly claim victory while millions still live in the devastation ISIS wrought.

We have a tendency to forget our past, especially the harder, uglier, or more painful parts. Whether it’s the systemic oppression of people of color in the US, our military misadventures in other parts of the world, or the last time we wrote off ISIS as a spent force nine years ago.

The world may have declared victory. But we are digging in for our friends in Iraq and Syria. We’re staying. The real victory is when peace is restored, when homes are remade with and for our displaced friends.