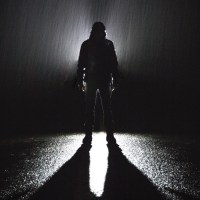 “For the past years since you killed her, I have been struggling with the meaning of forgiveness. The Bible says I should forgive and not judge you, but all I can feel is a hot, burning desire to see you shanked in prison by some monster who is even more of a monster than you.  Someone bigger and uglier and meaner. Someone who will make you feel small and helpless, who will shake you down to your bones with a terror so horrific that you wish for a death that never comes.”

—Excerpt from a letter to a murderer, never sent.

Sometimes we hurt. And sometimes that hurt comes as a reaction to what other people do or say. We feel fear and anger. We are forced to cope with these feelings.

As toddlers, we lash out. We hit our mothers, our siblings. We throw things and break things. As adults we are expected to control our monstrous impulses and “act like human beings.”

Sometimes instead of taking the time to process our own feelings, we huddle with others who are just like we are and we point across the room, across the street, across the world to people who are different than us and say, “That’s the problem right there.” The problem is with those monsters, those vermin, that infestation of people who are coming for us.

Dehumanization happens when we apply labels to people to make them less-than. When you make someone less-than-human, it is easy to make war against them. We’ve heard speeches where one ethnicity is called “vermin” by another or shown as rats in propaganda posters. We’ve seen it in laws where one race of people is counted as three-fifths of another, or in some countries, not counted at all.

And it’s not limited to our darker past. Right now, black people are shown in caricatures as apes, bananas are thrown onto fields where black athletes compete, and we dehumanize asylum seekers and migrants by calling them “illegals.”

By applying labels to people, it frees us from the moral responsibility of good behavior. There is no expectation to treat a rat like a human, because we’ve come to the consensus that rats are less-than. When we dehumanize, we set ourselves free of the weight of dealing with our own sadness, fear, and anger, because nothing is our fault. We are the good ones, the pure ones. We are the ones in the right.

It is easy to drop a bomb on the faceless hoard you fear. But not the well-groomed person with your matching skin-tone sitting at the table next to you in the bougie coffee house. That lady… she’s real. She is human.

But here is the problem with monsters: when we create them, we become them.

The love you give is healing the world. It’s creating fewer monsters. It’s saving your own life.

When we allow ourselves to become divorced from our own compassion and empathy, we become the thing we fear. We are driven by those forces we complain about in others. We snatch a hijab off the head of a woman in an airport because our country was attacked. We march down streets in Charlottesville because we are afraid equality for blacks means less rights for whites. We write hate-filled, vitriolic letters to murderers in prison because someone we love was taken from us one night a long, long time ago.

We are kidding ourselves if we don’t admit this.

People who know me describe me as loving and kind and funny. Strangers, if they noticed me at all, would probably describe me as non-threatening and pleasant enough. The truth is, I’ve been that monster. I have hated, I have dehumanized.

As deeply and as richly as I can love… I have an equal capacity for hate.

But now I understand it, because I’ve been there—standing at that crossroads, the one where you get to choose the next part of your path. The crossroads where the signpost points one way to darkness and hatred and the other way points to compassion and understanding. I stood there for one long, agonizing twilight. I tried both paths in my mind. Back and forth. Back and forth.

Finally, I chose the harder path, the one less-seductive. Loving people is easy when they are “your people.” Loving people is hard work when they are not. But at the end of the day, no matter how tired you get, it’s satisfying to know that the love you give, even if it feels sacrificial, is healing the world. It’s creating fewer monsters. It’s saving your own life.

“Listen to me. I wish it was as simple as simple hate. For years I have imagined so many scenarios involving your torture and destruction that I find myself exhausted by it all because unlike you, that sort of evil is not in my nature. Sometimes, in my less-finer moments I find myself wishing I was more like you. But what I really want to do… is be good enough, virtuous enough to be able to write a letter like this: ‘Dear Terry, I forgive you.’”