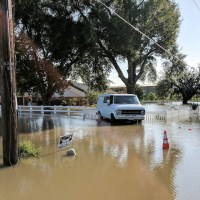 If I give monthly, will my part of donation be used to help in Houston?

Several of our nearly 5,000 (!) monthly donors have been asking this lately, and a few more of you are probably wondering the same thing.

The short answer is yes.

If you give monthly, whether you just started giving a week ago or you’ve been doing so for years, your donation has been helping everywhere we serve. You’ve been feeding war-torn families in Mosul. You’ve been repairing bombed-out homes in Aleppo. You’ve provided ongoing medical care for refugees stranded in the desert. And now, you’re showing up for some of the most vulnerable families impacted by Hurricane Harvey.

That’s the real impact of giving each month. It’s so that whenever and wherever violence unmakes the world—whether it’s bullets and bombs or the violence of a hurricane—we can swing into action. We don’t have to wait until we’ve raised money to act. We can take the risk. We can step into the unknown… because you’re right there with us.

Our team was on its way to Houston before we’d raised a dime for our emergency response. We were able to embrace this new challenge—this new area of need—right away, because you were already there.

Since then, thousands of people have stepped in and given specifically for Houston, which allows us to do even more. But you were the catalyst. You were the jump start. You are the reason we could say “yes” without having to spend a week deliberating, without having to navigate all sorts of red tape while families languish, and without having to divert funds from anyone else who needs our help.

If you’re a monthly sponsor, you’re already supporting those who were battered by the storm in Texas. Thank you. If you want to make an additional gift, like many of you have asked, specifically for our Harvey response, you can do so here at any time. But know that your love is already on the ground.

And if you’re not a monthly sponsor, imagine what you could be part of. This community doesn’t sit by when the worst happens. When lives are torn apart, this community jumps into action. This community shows up and stays until lives are rebuilt and the wounds of war and disaster are fully healed.

It doesn’t have to be Iraq or America. Aleppo or Texas. Mosul or Houston. Your love is loud and strong. And you are remaking lives all over the world.