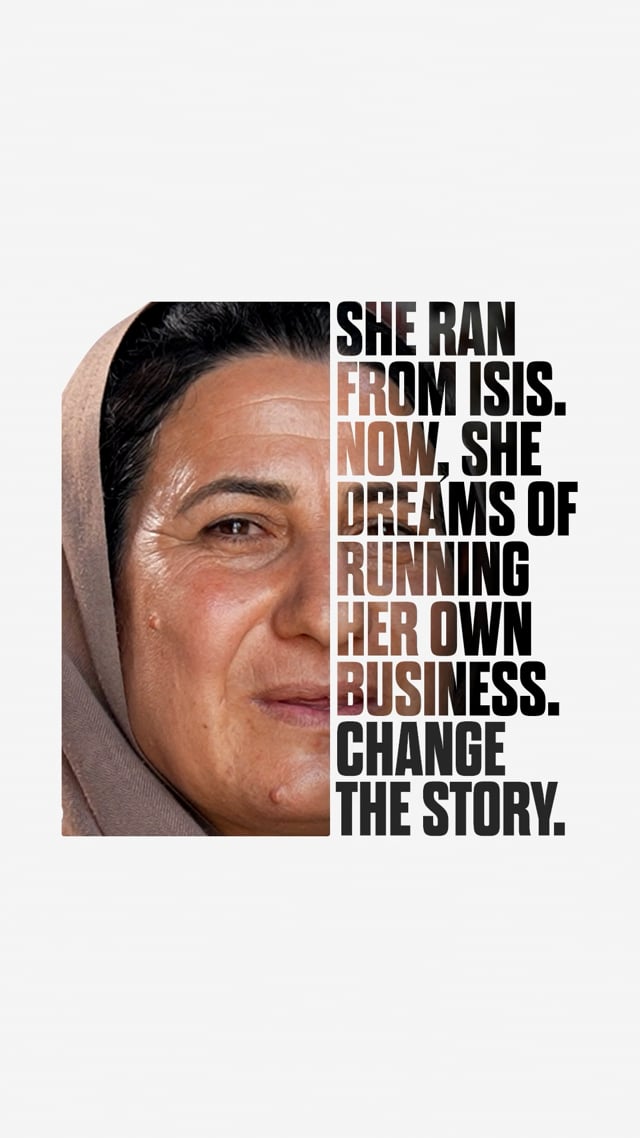 The zhuring tik-a-tik-a-tik of Haifa’s sewing machine drowns out the cacophony of conversation inside Haifa’s shop. Women from all over the camp, from nearby camps too, come to this sewing shop to get dresses made for themselves and trousers, blouses, and school uniforms made for their families.

Keeping her eyes on her hands, Haifa guides the fabric beneath the sewing machine’s needle to make a smooth hem, smiling continuously as she works. She has the kind of smile that makes her eyes shine. A short time ago, a shop of her own was an unreachable dream. Back then, Haifa could barely afford to feed her five children and keep them in school.

Haifa is a Yazidi, living as an internally displaced person (IDP) in a camp inside Kurdistan. Yazidis are an ethnic and religious minority group indigenous to Kurdistan. In 2014, ISIS attacked the Sinjar region, including Haifa’s village, killing Yazidi men and enslaving Yazidis women, girls, and boys in a campaign of genocide.

When Haifa recalls the ISIS attack on her village, the light in her eyes dims. “My city was beautiful, and we had a simple life. We worked with no fear. Many things changed. We didn’t feel comfortable psychologically.”

Haifa and her husband gathered their five children and fled. Eventually, they resettled in a village near an IDP camp in Kurdistan. Haifa’s heartbreak continued when her husband died one year later. “After we fled from ISIS, the most difficult thing was losing my man. And you know, it is so difficult to manage and feed five children. It’s a big responsibility.” Haifa was determined to find a way to take care of her children and most important to her, keep them in school. “I became a victim, worked hard, and suffered a lot just for my children to be able to study.”

Widowed, Haifa and her children moved into the IDP camp where she learned about our jobs creation program, which opens small-medium and micro businesses for Iraqis affected by war. Business owners receive individual support and customized coaching for a full year after they have opened to ensure their success. We also connect business owners to each other to create supportive communities where ideas and experiences are shared to benefit everyone.

Haifa was an excellent candidate for this program. She was an accomplished seamstress already but she didn’t have a good sewing machine. Thanks to you, we were able to give her one, plus some cloth, thread, and other incidental items so she could open her own sewing

shop. “This was my hope and my dream to start up a business and have a big sewing shop where I sew dresses.”

A small investment changed Haifa’s story from one of pain to a triumph of joy. “Thanks to God, after I started working on my sewing business, I feel comfortable psychologically and have money to manage life.” Ambitious, Haifa wants to expand and improve her business. Talking about the high demand for her work puts the light back in Haifa’s eyes. It is easy to see the pride she takes in being able to provide for her children “so they could have a good and bright future.” She also relishes her self-reliance. “My work is so good. I feel very comfortable.”

Haifa is right: when our work is good, we do feel comfortable. At Preemptive Love, we are providing the means for those whose lives have been disrupted by war to change their stories, and create livelihoods that stabilize vulnerable communities. A donation changes the story for people in need but also for ourselves. We feel “comfortable” when our displaced friends triumphantly realize their dreams.