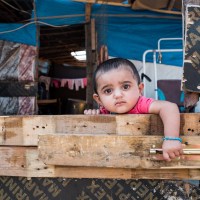 What would it take to end war?

Not putting flowers into gun barrels. Not singing “Give Peace a Chance.” Not clinging to simplistic, naive, utopian idealism. But actually doing the hard work to disrupt the cycle of violence?

Some have compared violence to a disease. Maybe they’re onto something. There is evidence that violence behaves like any pandemic—flu, cholera, malaria. So maybe by treating it like one, we can actually do something to stop it.

But where do we start? If we wait for the current wave of violence to subside—whatever crisis or the war that’s raging now—we’re already too late.

We help fast on the frontlines of conflict—to do just that.

Food to help families survive. Shelter to remake home. Medicine to mend the wounds of war.

War-torn families shouldn’t have to brave bullets and bombs to reach the help they need. Their only option for safety shouldn’t be the confines of a refugee camp.

Related: Driven Out By Airstrikes, But Not Alone

We provide aid as close to the frontlines as possible, where the need is greatest. We give families what they need to hold on and hold out—because if they can stay at home instead of having to flee, the road back from war is shorter.

Emergency aid shouldn’t be just a short-term solution; it should have lasting impact. So we partner with local groups who know the needs best, and with displaced families, making them part of the solution. We employ local teams to deliver aid. We hire local doctors to staff clinics.

We source aid as locally as possible—which may seem counterintuitive when there’s a war going on. But war almost never affects everywhere equally. Parts of northern Syria are at peace right now, while war rages just down the road. There is almost always a local business that can help supply whatever need exists, strengthening the local economy while rebuilding

Countries like Syria, Iraq, and Mexico have everything they need to mend the wounds of war. Sourcing aid as locally as possible is safer, more cost-effective, and benefits more people by boosting the local economy.

When you show up with lifesaving medical care, emergency food packs, or winter kits for families on the run, when you provide solar panels to power shelters or backpacks full of supplies for asylum seekers on the US-Mexico border, you’re doing more than meeting short-term needs. You’re disrupting the cycle of violence. You’re laying the foundation for another future.

We’re there when violence starts. And we’ll stay as long as it takes, to mend the wounds of war, to rebuild communities, to return families home. To end war.

Give now and provide lifesaving food and medical care on the frontlines—and stop the spread of war.