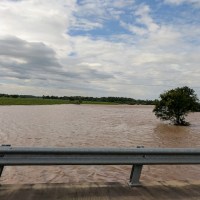 The floodwaters from Hurricane Harvey are finally starting to recede, but the damage left behind is overwhelming.

At the peak of the storm, 70% of Harris County was under water, including many areas well outside Houston. In some cases, entire communities were flooded, the devastation stretching across an area the size of New Jersey. Tens of thousands of Texans are currently displaced—stuck in overcrowded shelters, unable to go home.

Here are three things to know about our early response:

When it comes to flooding, “hardest hit” may not always mean “hardest to recover.” We’re focusing on the poorest, most vulnerable communities—those less likely to have as many resources within reach to cope with a disaster like this.

We’re filling gaps—reaching areas that have felt the effects of the storm more acutely or are less likely to see an influx of support.

These include lower-income neighborhoods in Houston where families are less likely to have insurance, and where many parents work hourly jobs that don’t offer flexibility or paid leave to deal with a crisis like this. If they miss work, they’re out of a job—and they don’t have another safety net to fall back on.

We’re also assessing the need in smaller towns outside Houston—places you won’t see on the news, that don’t have the same resources to cope with this disaster. In the coming days, we’ll have more to share about how we’re responding in these communities.

2. We’re partnering with neighborhood organizations in and around Houston.

We’re coordinating our response with local organizations because “coalition” is more than just part of our name. It’s everything we do. It’s who we are.

This is how we’ve worked in Iraq for nearly a decade. It’s how we work in Syria. And it’s how we’re serving in Texas: by coming alongside those who live in these communities, who’ve invested countless hours serving these communities—who know the streets and the people here better than anyone, including ourselves.

We are here to amplify their impact.

3. Numerous major distributions are coming together.

The following distributions are underway or are coming together quickly. It’s important to note that the needs can vary widely from one impacted place to the next—which is why in each case, we start by asking local partners on the ground what they need to serve their communities.

Linens and towels for families returning home: We’re working with Bayou City Fellowship in Cypress, along with a few world-class athletes who are long-time members of our Preemptive Love community and corporate partners, to provide towels, sheets, bedspreads, comforters, cleaning supplies, and more for those whose homes were flooded. Many household items have to be thrown out after they’re contaminated with floodwater—with our local partners, we’re helping replace what was lost.

Clothes for kids so they can get back in school: We’re working with KIPP Public Charter Schools to provide clothing for underserved students who were impacted by the storm. A handful of high-end fashion designers and brands have come along and offered to donate thousands of articles of clothing.

While many shelters don’t need clothes right now—and we are listening to them and following their lead—our friends at KIPP have told us their students are in need of new clothes after the storm. Many are about to go into their college interviews, and you will help ensure they have something nice to wear. Instead of distributing clothes in predefined packages, these students will be able to choose what they want—allowing them to reclaim a small but vital sense of control after a storm that took it away from them.

Food and support for refugees and immigrants: Yesterday, we began going door-to-door with Cornerstone Family Ministries, to assess the needs in a part of Houston where up to 80% of the families are undocumented immigrants, many of whom are unable to work right now because of the storm.

We helped several of these families get food and other vital supplies. We also began offering support at a local shelter housing a number of Syrian refugees who were displaced by the storm, shortly after escaping the violence of war back home.

This is only the beginning of our response. We’re currently working to mobilize four crews as early as Monday, to start working in homes that were damaged by the storm. And there is still more to be done.

Texas is home for so many of our staff. We’ll be here long after the cameras have moved on, helping families dig out and resettle. Thank you for standing with them. We’ll share more updates in the days ahead.