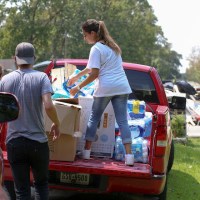 The waters of Hurricane Harvey are finally receding in Southeast Texas, but the full extent of the need is becoming apparent. More than 100,000 homes were affected. Up to 500,000 cars were damaged beyond repair. Several small communities have been cut off by floodwaters for days.

But your love is on the ground. We’re rushing initial aid to vulnerable communities and building out a long-term response—in collaboration with churches, nonprofits, and other organizations all across the region—to help families get back in their homes and put their lives back together.

We’re applying what we’ve learned over more than a decade of responding to frontline emergencies in the Middle East to show up for flood-affected families in Houston and beyond.

Here’s the latest on our response from our team in Houston.

Every home that flooded now has to be gutted—in some cases, all the way up to the ceiling. Carpet, furniture, and drywall all have to be removed and the house dried as quickly as possible, before mold sets in. A number of area churches have mobilized to begin the clean-out process. We’re supplying local demolition and cleaning crews with dehumidifiers, fans, safety masks, gloves, crow bars, hammers, saws, cleaning supplies, and more—equipping them to serve across Houston, especially in vulnerable neighborhoods where families are far less likely to have flood insurance or any kind of safety net.

A number of you have volunteered to serve in flood-damaged homes—we’re in awe of your commitment to showing up on the frontlines with us. Over the holiday weekend, our local partners were able to keep pace. But as people return to work—and as we identify more homes in need of repair—we may encounter a volunteer shortage.

If you’re ready to serve on the ground, complete this form. We’ll contact you if there is a need for more volunteers.

Many of the larger, official shelters are overcrowded but well supplied. However, many smaller shelters and distribution points are handing out emergency supplies as quickly as they get more in.

Yesterday, we got a call from a one distribution point in Beaumont (90 miles east of Houston) that they were rapidly running out of supplies. Within hours, we rushed a delivery of food, diapers, and feminine hygiene products to their distribution point, where they are serving some of the most vulnerable families in Beaumont and nearby Port Arthur. The entire city of Beaumont—nearly 120,000 people—have gone without clean water since the storm hit last week, so we also came alongside a nearby church bring water to residents in one low-income neighborhood.

While there, we found out about several displaced families in nearby Port Arthur who had no way of reaching the distribution point. Until a few days ago, the entire city of Port Arthur was underwater. We teamed up with our friends at the Beaumont mosque to rush some of the supplies we brought—hygiene kits, diapers, water, and bread—to these families. When we arrived, we learned there were 24 people from four different families living in a single home—it was the only dry place they could find to ride out the chaos.

This is not an uncommon story here. Many shelters are beyond full, and the most impoverished families have no way to reach them anyway.

While much of the media’s attention remains focused on Houston, we’re shaping our response to include overlooked, underserved communities in other affected areas.

On Monday, we joined one of our local partners in a north Houston neighborhood that was reportedly one of the first places to flood. The people in this community rely on well water—but their water supply was contaminated with sewage. According to our local partners, it could be weeks or months before clean water is restored. Yet according to families in this neighborhood, almost no one else has come. Many of the families were attempting to clean out their homes themselves. Almost none of them have flood insurance to help them cope. They are racing against time… and right now, time is winning the race.

We went house to house—meeting families, listening to their needs, and handing out emergency relief supplies like water, essential hygiene supplies, and more. We’ll continue to show up alongside our local partners who made this response possible, so families have what they need to hold on while we ramp up our response to meet both the immediate and longer-term needs in these communities.

Thank you for showing up with us in Southeast Texas. The devastation here is massive, but the people of Texas are strong. They have what it takes to build back better—if we continue to stand with them