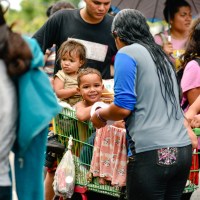 On Monday, a large caravan of asylum seekers left the city of Tapachula, Mexico on foot, and headed northwest to Tuxtla Gutiérrez, Mexico, around 200 miles away. There are about 15,000 people walking along the highway. There are many families with children. On Tuesday, we joined them. We are here, giving water and diapers to families on the road.

“It’s been a very moving morning,” our staff messaged. “It’s amazing to see how the kids keep walking with their parents without complaining. They know that they must keep walking, no matter what. 💔 “

Thousands of asylum seekers at the southern Mexico border–the majority from Venezuela, Haiti, and Central America–have grown so impatient with Mexico’s overburdened refugee system, they cannot wait one more day for help. They are determined to get the proper government paperwork that would allow them to continue their journey north, to finally find a safe place to land.

Currently, upwards of 45,000 people have been waiting in Tapachula for this paperwork. Life in the crowded city has become unbearable. They are not allowed to work while waiting for official status, they face hunger, abuse, and xenophobia.

In the past when smaller caravans have left Tapachula, they often found law enforcement officers waiting not far from the city, ready to detain them. The Mexican government has relied on a strategy of containing migrants in the southernmost part of the country to alleviate pressure at the U.S. border. But this plan has not worked and has only caused more division between the local community and migrants. Several residents have told us, “Tapachula is a ticking time bomb.”

The backlog of asylum seekers is currently so great, and the city so crowded, that most expect the government will allow the caravan to continue. That said, the highway where the asylum seekers are walking is also filled with trucks and buses from the National Guard—we counted at least 20 or 25 big buses full of military and National Guard agents.

“The government is going to let them walk,” we’re told. “And get sick, injured, and desperate in order to leave the caravan by themselves. It is easier to detain people when they can not run anymore.”

Two Thousand Miles and Months Away from US Border

Social medial posts claiming that the arrival of caravan walkers at the US border is imminent, and timed to coincide with the Summit of the Americas happening in Los Angeles, California this week are nothing but fiction. The first stop for caravan walkers is Tuxtla Gutiérrez, Mexico where asylum seekers will apply for the official status they’ve been waiting for. This process could take months.

When the correct paperwork is finally issued, the trip for families who continue to walk will be grueling. The two-thousand-mile trip would take 53 days to walk if a 12-hour-per-day pace could be kept—impossible for families with children and disabled members.

War in Ukraine Brings More Pressure to US Southern Border

Many global asylum seekers, refugees, migrants, and Mexican families displaced because of violence continue to come to cities in Northern Mexico, hoping to cross to the US. The dangers they face are rising: reports of human trafficking by authorities and media outlets are increasing. Daily, migrants are rescued from “safe houses” which are far less than safe.

In recent weeks, the pressure at the US southern border has grown from asylum seekers from Ukraine, displaced in the war with Russia.
Ukrainian asylum seekers have not had to follow the same rules as those from Latin American, Caribbean, and African countries. 22,000 Ukrainians have entered the US at its southern border and have not been asked to wait in Mexico for processing.

“Remain in Mexico” meant “Remain in Danger” for Asylum Seekers

Over the last few years, both the Trump and Biden administrations had versions of a “Remain in Mexico” policy that required refugees seeking asylum in the United States to wait south of the border while their cases are adjudicated in the U.S. The policy was put into place as a COVID-19 management measure.

Big promises were made to asylum seekers who followed this system: quick immigration proceedings, access to safe and secure shelters, a work permit, and access to healthcare in Mexico. This never materialized under either administration. Many thousands of asylum seekers lived in overcrowded shelters or makeshift encampments in northern Mexican border cities like Tijuana, Ciudad Juárez, and Matamoros, where they were easy prey for members of organized crime.

While the Biden Administration’s iteration of the program included more humanitarian safeguards, like access to the COVID-19 vaccine and immigration lawyers, the basic tenet–which forces asylum seekers to wait in Mexico–went largely unchanged. Every media story which covers even minor changes in US government refugee policy sparks a new wave of hopeful migrants.

“Remain in Mexico” policy has drastically affected the northern and southern borders of Mexico. The number of families desperate to find a safe place to live continues to grow. The current administrative systems continue to struggle under the volume of claims, and the pressure for all continues to rise.

And in the midst of it all, we are here. Standing with those fleeing violence and seeking safety. Distributing items to the most vulnerable. Loving those others would prefer to wish away.