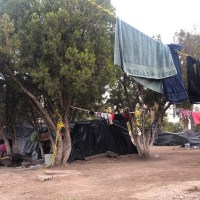 The month of November isn’t over, and already residents of Juarez, Mexico are reeling from violence unleashed on their community this month.

Juarez sits on the other side of the border from El Paso, Texas. In fact, on a map you can barely see the thin line of the Rio Grande River, bisecting the two cities. The heavily armed border is, of course, invisible. In reality, the two cities are a world apart.

So far this month, Juarez has experienced stunning levels of violence, even for a city known for it: 91 murders, 50 bomb scares, and 37 vehicles burned. Residents are shocked and afraid.

Juarez is also where thousands of asylum seekers are now forced to wait—unable to cross into the United States, unable to go home, often targets of the increased violence.

Why An Upturn in Violence Now?

It is widely believed a crackdown on jailed cartel and gang leaders triggered the most recent wave. Mexico’s prisons have been unsuccessful at stopping those convicted of trading guns and drugs. Organized crime leaders continue to operate from inside the prison system, many with smuggled cell phones.

Recent attempts to confiscate weapons, drugs, and cell phones from the state prison were seen as a threat to “business as usual.” Many believe that the initial violence on the streets of Juarez was intended to stop the prison raid—to send a warning. When the raid didn’t stop, those in the cartels began to lash out in anger.

What’s different this time around?

But this has changed. The anger that spilled out of the prisons and into the streets of Juarez is lethal and indiscriminate. In this latest round, average residents and asylum seekers have been targeted.

Another difference: US policy has increased the number of vulnerable people at the southern border: Late last year, the White House announced a change in how it would regulate asylum seekers wishing to enter the US. The Migrant Protection Protocols, popularly known as the “Remain in Mexico” policy, rolled out over the course of the year.

Previously, people making a claim of asylum could stay in the US while their claims were processed. Now, those seeking asylum must wait in Mexico.

Other policy changes are dramatically slowing the number of people admitted to the US as refugees. The cap for 2019 was set at 18,000 people, a 40% reduction from the year before. Currently, 98% of asylum claims are denied. And it has been widely reported that not a single refugee was admitted to the US in the month of October—a first in decades.

At the same time it’s becoming more difficult to enter the US, the causes of the migrant crisis—global violence and a need for safe places to live—continues unabated.

Families continue to flee communities that aren’t safe, and risk their lives to find a solution. They can’t return home. That’s not an option. So tens of thousands find themselves stuck in a city going through a rise in the same kind of violence that caused them to flee home in the first place.

Who is most impacted?

When violence spikes, everyone suffers. No one is immune. But it is often the poor and marginalized who feel the effects first, and suffer the longest.

My colleague Rafael, who lives in Juarez, explained how he finds himself responding as vehicles are set ablaze across his city, gunshots rip through the air, and sirens scream into the night.

He stays inside the relative safety of his home a little more often. He’s not hiding—but he is more cautious. He and his family aren’t going out after dark. They find shelter with each other within the walls of their home.

But the most vulnerable don’t have a home to provide shelter. The homeless, the marginalized, and the thousands of migrants in tent cities have little to protect them. The thin walls of a tent hardly keep out wind—and they are no match for bullets!

Many of the marginalized are also suffering the effects of a lack of community. Migrants at the US-Mexico border often don’t speak the local language. Even those from Central America may speak a different dialect of Spanish. They can’t read newspapers which explain the causes of recent violence. They don’t understand the local chatter that is often essential to staying alive—which streets to avoid, when to stay home, when it’s not safe to even walk to the grocery store.

What is Needed Most?

On Giving Tuesday, December 3, we’re going to share a way to provide just that for them. We’re digging deep with our refugee friends in Juarez, and we need you to go with us.

To be the first to know what’s next for asylum seekers on the US-Mexico border, text border update to 72000.