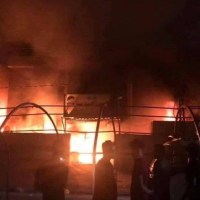 Protests escalated swiftly in southern Iraq this week, especially in my city, Samawah.

Three people were killed yesterday (including one who died from his injuries today), after police opened fire on protesters. About 90 protesters were injured, along with 24 police officers.

The protesters targeted political offices and the homes of party leaders, as well as a TV station where I used to work and a debt collection company. They also briefly shut down the airport in Najaf and the port in Basrah.

Today, everyone here is worried. The protests have stopped in my city (for now), but they are continuing in other parts of the country. Internet access was temporarily shut off in southern Iraq, and social media was blocked across the entire country until earlier today.

But now footage from the past two days is being shared, and we can see what is happening. I’ve seen footage of people being killed by police in my city.

So why are people protesting?

People are forced to go hours or even days without electricity, sweltering in the summer heat. There’s also a water crisis—many neighborhoods didn’t get water for five days or more. When they finally did, the water was so dirty they couldn’t even wash with it.

It’s been the same story in Iraq for most of my adult life. Since the US-led invasion in 2003, military and political leaders have promised jobs, electricity, water. More than 15 years and multiple elections later, we still have the same problems.

I am afraid for what will happen next, because we’ve seen this before—in 2005, 2007, 2011. Some politicians have already blamed the protests on outside actors or extremists or former members of Saddam Hussein’s Ba’ath party. People can lose their lives over accusations like these. This will lead only to more violence.