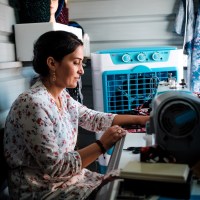 How strong is passion? Would it be extinguished through war, the extreme deprivation of near-total loss? Of genocide against your people?

Could your passion even grow, despite displacement and collective trauma? Through the stress of providing for your family? And on top of all that, through cancer?

This is everything that Bayan has been through and more. She is a Yazidi, the indigenous people who have lived in the region now divided between Iraq, Syria, and Turkey, for thousands of years. Most Yazidis live in northeastern Iraq, and a large part of the world learned about them when ISIS came for them.

In August 2014, ISIS swept into Yazidi villages around Sinjar—one of the largest Yazidi communities in the region—and tried to kill them all. Those who survived fled up Sinjar mountain, where many more died from thirst and exposure, in the blistering heat of Iraqi summer.

The Yazidi religion predates Christianity and Islam, blending some of both with pre-Islamic Assyrian traditions, Sufism, and Zoroastrianism. ISIS considers them heretics, and that is the group’s justification for committing genocide agaist the Yazidis.

All communities targeted by ISIS suffered terribly under the regime’s brutality. But no other suffered as much as the Yazidis.

Bayan and her family were lucky to survive ISIS’s sweep through their city, and 10 days on Sinjar mountain without food, water, or shelter, before being able to leave and eventually make their way to this displacement camp. They have lived in this camp for 5 years.

Bayan had a tailoring business in Sinjar. They fled with nothing, and like hundreds of other displaced and refugee families in camps all over northern Iraq, making ends meet was a struggle. Her husband does physical laboring work when he can find it, but jobs are scarce in and around camp, with thousands vying for the same few opportunities. And Bayan has leukemia, which she is managing with regular visits to the hospital, but it is a huge expense.

But none of that has stopped her from doing what she loves: sewing.

Bayan feels deeply for her profession. When she started her tailoring business in the refugee camp with your generosity, it was much more than income—sewing is very much a part of her identity.

Over the years she’d tried making knitted and crocheted items with what material she could afford, to sell to people around the camp. She has also coached others in the art of sewing, in programs run by various aid groups. These programs didn’t pay, but she was happy to do it anyway, because she loves her craft and wants to share the satisfaction of it with others.

So when you started Bayan’s tailoring business, you didn’t only help her feed, clothe and educate her children. You gave her back an essential part of her identity. You helped her to do what she loves, to nurture the spark of joy in her that the disaster of war has somehow been unable to extinguish.

Now that her shop is up and her business is in full swing, Bayan is swamped! Hers is the only sewing business in her section of camp, so she is making the most of its strategic placement and is excellent at what she does—making, adjusting, and designing clothing for men, women, and children.

Bayan frequently works in her shop until midnight, to finish last-minute garment requests for customers who come in a rush. She’s extremely busy and as we joked about her needing to hire a few of the people she’d previously trained, Bayan smiled thoughtfully… it’s definitely a possibility.

It’s a truth we encounter often, that when you help a woman, she helps those around her. Bayan is a shining example of this.

Lift our displaced sisters so they can lift their communities from the devastation of war. Give today.