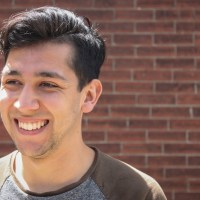 José is a bit of a legend around town. His name is tossed around by friends who rave about this incredible, smart, motivated, good-hearted, and brave young man.

Then I heard him speak at a benefit concert for migrants needing legal aid. He was incredibly open and honest, well-spoken and real. I fan-girled after the concert, eager to connect with José and to get to know him.

José is a senior at Goshen College in Indiana, pursuing a degree in Sustainability Studies. He works at the local brewery tending tables and attends car auctions with his dad. As a high school student, José spent a year serving as the youth advisor to the city council. He organized a mentoring program and was a Get Out the Vote coordinator for the city during the 2016 election.

José is also a Dreamer. His parents brought him to the United States when he was 5.

José is known around town for his community involvement, his wide smile, and his kind-hearted activism. Last year, he started a podcast called Ecotiva Radio. The podcast focuses on the intersection of environmental issues and marginalized communities, a topic José is passionate about.

José is passionate about bringing marginalized communities into the conversation and empowering them to be a part of change in their community. Because he knows firsthand that ecological devastation disproportionately affects marginalized communities and fuels displacement all over the world—from drought in Syria to deforestation in Central America.

“Being an immigrant myself, being gay, being from Latin-America, I know what it is to be left out. But I also know how marginalized communities face the brunt of environmental degradation.”

José and his family immigrated from Mexico when he was 5-years-old. He grew up knowing poverty and a lack of resources.

“It’s all about extractive structures,” he says, pointing to large corporations that extract raw materials from developing countries—or extract labor from lower-income families domestically while providing less-than-adequate conditions and wages.

So where do we begin?

It starts small, and it starts with each of us.

“Everyone can do better, whether it’s riding your bike instead of driving your car or buying your favorite food locally, or the organic version, or fair trade.” It’s these small steps that build local economies, that empower small businesses, that create sustainable solutions leveraging the very people who live in that place.

From immigration to climate change to small businesses, José is working to create positive change through knowledge and action in his community. What steps can you take, in your neighborhood, to create a more sustainable, more connected world?