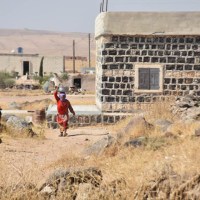 Good morning team, this is a quick update. I am on my way to meet some people who came from Idlib, that our kitchen is going to start serving today.

Situation: security is very tight and mortars are falling. In Aleppo yesterday, 11 children and women were killed by a mortar shell and there were more than 15 injured people.

Michel, our colleague who drives the rutted back roads of Syria alongside trucks packed with huge pots of hot food, sent the report above while traveling to spend time with families who made it out of the Syrian city of Idlib. The Idlib area is home to around 3 million people, including many who sought refuge here from other parts of the country. But for the last three months, the city has faced a heavy campaign of airstrikes intended to restore government control.

Three months of heavy bombing. Three months of acute terror. And before that, countless times of being displaced and trying to find a place to live free from bombings.

It’s extremely difficult to get out of Idlib into safer areas. For those who do, and make it outlying small villages, it’s not easy to wait out the fighting. Families are crowded into abandoned houses they find along the way. There are few services here. In the summer, there is no water, except what is delivered in tanker trucks. And food, and the fuel to cook it, is extremely scarce.

It’s a bleak picture of a war that rages on long after most of the world has forgotten. It’s also the place where you are showing up in the most practical way.

As we have done in other Syrian towns where those fleeing war had a hard time surviving, you are providing the resources to run a hot food kitchen. Seven days a week, a group gathers to cook huge pots of hot food, delivered by a group of dedicated men who make sure their neighbors don’t go hungry.

When distribution trucks park near the center of the village, residents come with the biggest pot they have to receive that day’s meal. Some days the meal is rice and peas. Some days it’s groats with chickpeas or tomatoes. The menu rotates through a few dishes that are both filling and hold up well in the back of a truck bouncing over bad roads.

We met Fawaz and his family (pictured below) in their empty home. It used to be comfortable, with nice wooden furniture. The furniture was long ago burned, during the year or so the family sought shelter in Idlib when the violence in their own town got too great to stay.

Being home is better for his soul—Fawaz says he’d rather die at home than continue to be insulted anywhere else. But being home is so hard on his family physically. He, his wife Diana, and their children have suffered since returning.

Fawaz leaves each morning when the heat of the sun is already scorching, to work for a farmer packing hay. Harvest season is short, so he works long hours each day in order to bring some food home for his family. The pay is little—it barely covers transportation. But he never comes home empty-handed. Some days there a few loaves of bread. Some days there are a few potatoes.

This is who is eating the meals you provide. These are the children who don’t have to go to bed with empty bellies. You are helping real families, working as hard as they can to make it, have a hot meal each day.

And not just this family. On average, 12,000 Syrian kids, moms and dads, aunties and uncles who fled war are getting the emotional break, and nutritional blessing, they desperately needed.