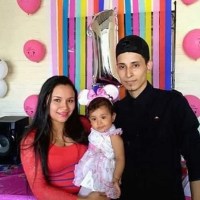 Did he even know how to swim as he hooked her under his shirt, her arms clasped trustingly around his neck?

Oscar Alberto Martinez walked into the muddy, rain-swelled waters of the Rio Grande anyway, because there was no other choice. Not really. Not for him. Not for his daughter.

Behind them: violence and hunger in Central America. A scraping life with no options, no hope.

Ahead of them: a country fortified with walls and border patrols, yet bursting with possibility in their eyes.

They waited on the Mexico side of the border, hoping for their chance at asylum. More and more families are being forced to wait here—without shelter from the scorching heat, without the option to work, without healthcare if they get sick.

Whatever you think America’s policy toward asylum seekers should be, can you understand why dads like Oscar take their chances on the river, desperate for a better life for their children?

Would you have done any differently if your family faced what they faced?

The last time the world noticed a refugee child washed up on shore, something changed. Many of us set aside our political disagreements because, for the briefest of moments, we remembered our shared humanity instead.

Do you remember what you felt when you saw Alan Kurdi’s body on that beach?

Do you remember what it was like to grieve his death, to mourn the loss of his future, to understand what compels a family to risk their very lives to get away?

Do we care as much when it’s Latino bodies washing ashore?

When it’s our shores and our deserts and our detention centers where they are dying?

When we no longer have the luxury of being outraged from a distance?

We can’t make this go away.

We’re responding right now, on both sides of the border. Because we believe in the power of love. Because these aren’t just other people’s children.

Ignoring the crisis that makes them run in the first place—ignoring the gang violence and economic insecurity in Central America that we had a hand in creating—that won’t make it go away.

Cutting off aid to asylum seekers, hoping in vain they’ll go back to the hell they fled instead of taking their chances here—that won’t make it go away.

Shifting the burden to the other side of the border, making our detention centers as inhospitable as possible—that won’t make it go away.

The question we have to ask—all of us, left, right, and in between—is whether we’ll embrace the love of power, or the power of love.

The love of power cuts off aid. Calls people animals. Has no compassion when children wash ashore, dead.

But the power of love? That’s something else entirely.

We’re responding right now, on both sides of the border. Because we believe in the power of love. Because these aren’t just other people’s children. Because we belong to each other.

Note: An earlier version of this post contained a widely circulated photo of Oscar and his daughter after they drowned. We have replaced that photo with one that was shared earlier today, showing the family together—as a reminder to ourselves and everyone who sees them that they are more than asylum seekers, more than what happened to them on the banks of the Rio Grande.