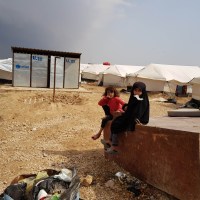 Rows of tents. Dirt roads. Women and small children standing near heavy tent poles and canvas sheeting, wondering how they will muster the strength to erect a temporary home for themselves.

Syria’s Al-Hawl refugee camp is bleak, and as months pass and the resident population swells, it’s become a place best described as forsaken.

In the eyes of much of the world, it’s simply known as the camp for ISIS families. And the only reason it’s on some people’s radar is the fear that ISIS families may escape as a result of the Turkish offensive in the Kurdish region of Syria.

But Al-Hawl is so much more than that.

What is Al-Hawl camp?

A refugee camp built nearly 30 years ago to house Iraqi refugees who fled during the Gulf War, Al-Hawl served as a shelter for Iraqis again after the US-led invasion in 2003.

At the beginning of this year, Al-Hawl became a temporary home to upwards of 10,000 Syrians displaced by war.

When the ISIS caliphate in Syria fell, families living in those areas were displaced to the camp as well. The number of residents swelled to around 70,000 in just three months because of a lack of resources—20,000 women and 50,000 children.

Many came from an area that had been besieged for a long time, so they were already hungry, thirsty, and unwell when they arrived at a camp completely ill-equipped to handle this many people.

A portion of detainees are foreign families from all over the world, who came to Syria to live under ISIS rule. These are the residents you’ve most likely heard about in the news. But in reality, camp residents run the full range from average families who lived in areas taken over by ISIS, to those completely committed to ISIS ideology.

This camp that was meant to be a refuge has become an unofficial school of ISIS ideology for the tens of thousands of children held here.

The nature of Al-Hawl is different now than when it was originally created. Because the majority of families here now are connected to—or accused of being connected—to ISIS, security is an issue. This includes full-fledged ISIS members, as well as the wives and children of ISIS members.

The camp now resembles something of an outdoor prison, with enough armed security to keep detainees inside the camp, but not enough to ensure the safety of all living in the camp.

(Note: You’ll also see the camp sometimes referred to as Al-Hol or Al-Hole.)

Al-Hawl is in the far northeast corner of Syria, a remote and sparsely populated area close to the border of Iraq.

The camp is just 40 miles from a health clinic in Baaj, Iraq that we rehabilitated last year (it is also used as a home-base for medical teams who go out to remote villages to see patients). The camp is only 30 miles from Sinjar, where we recently helped Yazidi shepherds restart their rural businesses with sheep, five years after they were targeted by ISIS for genocide.

Why does it even exist?

In the broadest terms, refugee camps exist to house those displaced by catastrophe (whether war, or natural disaster), those who have crossed a border to find safety.

But Al-Hawl Camp (like Ayn Issa camp, farther to the west and closer to the border with Turkey) serves another function: it is a temporary holding center for 10,000 foreign families connected to ISIS, whose country of residence before joining ISIS will not take them back.

Syria is still in the midst of a years-long civil war. Its courts do not have the capacity to deal with hundreds of thousands of ISIS fighters and family members. And most Western countries have been unwilling to repatriate their citizens connected to ISIS, whether for trial, rehabilitation, or both. Some countries have revoked citizenship for individuals with proven and public links to ISIS, leaving them stateless.

This puts tens of thousands of women and children in the most precarious position imaginable.

Conditions in the camp are terrible, as documented by various media sources, as well as our own staff who have spent time assessing the situation in the camp firsthand. A group of women most committed to ISIS have established something of a mini-caliphate within the camp, enforcing some ISIS rules with vicious violence.

This camp that was meant to be a refuge has become an unofficial school of ISIS ideology for the tens of thousands of children held here.

The camp falls under the UNHCR, a branch of the United Nations, just like other refugee camps the world over. It is run, and jointly protected by the Syrian Democratic Forces (YPG) and military contractors paid for by the US government. Until recently, the area was also protected by US forces.

But all that is up in the air, with the recent Turkish incursion into northern Syria. With US forces now gone, and new attacks by Turkish-backed militias consuming the resources of SDF forces, it is unclear how long the SDF will be able to secure the camp.

Up to two-thirds of private military contractors, who previously provided security at the camp, have already left. Cars have been lit on fire. Guns have been smuggled in and shootings have occurred. The violence and unrest in the camp has already begun to rise.

Why does Al-Hawl matter?

Months of profound scarcity have been devastating to camp residents who are unable to leave, and unable to work to provide for their needs. Food and clean water are hard to come by. Children die of disease and malnutrition.

A number of camp residents, still deeply committed to the cause of ISIS, have grown impatient with camp life. Violent outbursts, including the murder of fellow detainees and the burning of tents in order to instill fear and impose their ideas of strict modesty, makes life in the camp a dangerous proposition for everyone.

More than anything, there is a risk that families who remain in the camp, in the same living conditions, will raise their children under the banner of ISIS.

Among many families in Al-Hawl camp, devotion to ISIS is strong, and there is nothing but idle time on their hands to lament what they lost, and to plan for the future. They await the day when they are released from the camp so they can help reestablish a caliphate.

Children living in the camp struggle to have enough to eat, but they are fed a steady diet of hate against those not committed to their cause. Many have no memories of life apart from ISIS.

There is real reason to worry that without intervention, these children will grow up to be the next ISIS soldiers.

Many fear that with fresh battles taking place at the Syrian-Turkish border, and YPG forces needed there, there won’t be enough security left at Al-Hawl amp to keep the camp intact. There are concerns about both an uprising by detainees, and a liberating attack from outside.

We may have every reason to walk away, to leave them here. Many of these ISIS wives still fly the ISIS flag, they still want to see the return of the caliphate.

There is real reason to worry that without intervention, these children will grow up to be the next ISIS soldiers.

It’s easy to love the neighbor who thinks like us, believes like us. It’s uncomfortable, but still possible, to love the person who believes differently but still follows the same basic moral code as we do.

It’s another thing entirely to love those who act in ways we cannot fathom, who believe things we find completely reprehensible.

And their children—they are not guilty of the crimes for which they’re imprisoned in this camp. But if this is the only future they ever have, they will go the same way as their parents. They will fight the same wars and perpetuate the same violence.

There is only one way to change the ideas that lead to war—by showing up, right in the face of them. By pressing back against hate and violence with relentless love. So the cycle of us versus them, the cycle of war, is ended.

And so we’re in Al-Hawl camp, listening and assessing conditions here. We’re working on how to meet the needs of residents. We’re pursuing ways to provide crucial medical care and food, and to provide care for the youngest and most impressionable, these children of ISIS families.

Because violence is a disease. And we can only heal what’s tearing us apart by choosing to love anyway.

Mend the wounds of war in Syria, and help stop the next war before it starts.