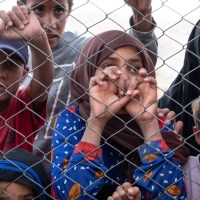 “We don’t have a vision for the future. Before, when we were in Syria, we thought about our future… how it would be, and how we wanted it to be for our children…”

“I want to live today, and I want to live tomorrow… the day after tomorrow, we will think about it when it comes,” said Shireen, a Syrian refugee who now lives in an Iraqi refugee camp after escaping civil war in Syria.

Close your eyes for a second.

Think about it… the pain of being unable to dream.

No plan or vision for the future. Just the survival of today, to make it through till tomorrow.

Your home, gone. You hope to return one day, but you’re not sure you ever will.

This is what life is like as a refugee. Everything in you is focused on survival. On caring for your family. Yet each day brings a new battle. A battle you’re afraid you won’t pull through.

The majority of us are fortunate—we don’t experience this. We have a phone or laptop that connects us to the world. Food in our stomachs. A bed to retreat to this evening.

But 25.9 million people live through this every day.

But what does it mean to be a refugee?

What is a refugee?

What is a refugee? It sounds like an easy question. But it’s harder than you may think.

After all, there’s differences between a refugee, migrant, immigrant, and an asylum seeker. They all share similar situations and they all need our love and support. Yet they do differ from one another.

So… what is a refugee?

A refugee is any person who’s forced to flee their country due to war, persecution, or because their home government cannot (or will not) protect them. Most often, they are unable to—or are too afraid—to return home. Like Shireen, they had to leave their home behind and escape to a new country.

This year so far, two-thirds of all refugees come from five countries:

These countries are overrun with war, famine, and conflict. Millions of families have fled, leaving everything they owned behind. It’s the last resort, yet unfortunately a growing necessity for so many.

How do people become refugees?

As tensions in Syria increased, Khadija and her husband sent their eldest son to Iraq in an effort to protect him. They worried he would get dragged into the middle of Syria’s civil war, caught in the crossfire between government forces, rebel groups, and ISIS.

They were right to worry.

“When Syria is safe again, we will go back. Syria is our home,” Khadija says. “Even though our house is destroyed, we can rebuild… because we are all safe.”

Safety is all that matters under such situations. Leaving home isn’t a decision a person makes lightly. It’s thrust upon them. Khadija and her family had no choice in the matter. They were not part of the war, yet the war had become a fundamental part of their lives.

They were forced to make a decision: survive or die.

This is how people become refugees. Their home is no longer safe so they have to find a new one. Currently over 25 million people have refugee status.

How is refugee status determined?

When someone like Shireen or Khadija flees their home, they’re registered with an official agency, such as their country’s government or the United Nations.

This allows them to gain access to state and international aid and assistance.

To receive this status, though, they must go through a Refugee Status Determination (RSD) process.

Once they do, refugees have legal protections guaranteed by the United Nations Refugee Agency, or UNHCR, including economic and social rights (and the ability to bring immediate family with them).

There are several types of refugees:

It’s often a fine line between one refugee status to the next. Yet it’s important to know the different types of refugees because each has access to specific aid and legal protection.

All this combines to create an ever-growing crisis that’s impacting the world over.

What is a political refugee?

Arguably the most famous form of political refugees were the Jews during World War II. Persecuted for their religious beliefs, millions had to flee their homelands due to fear of genocide.

Political persecution like this continues today and leads people to apply for refugee status while still outside of the country they wish to enter, asking for safe passage into the country. This is different from asylum, which refers to someone who has already entered the country (or attempted to through a port of entry) and files for an application to stay.

There are several types of refugees and it isn’t easy to determine who fits which status. Each situation is different, but it all comes together to create a worldwide refugee crisis that we cannot ignore.

What is a refugee crisis?

A refugee crisis is when a dangerously large group of people are displaced from their homes.

There are several refugee crises around the world at the moment, including:

These are among the most severe refugee crises around the world, but unfortunately, none of this is new.

The worst refugee crises in recent history include:

As these startling refugee statistics show, the Syrian refugee crisis compares to some of the worst crises in recent times. Yet since the end of World War II, we’ve experienced more than 16 refugee crises that displaced over 1 million people from their homes.

The world has seen refugee crises before. But as global populations increase, the impact this has on us all increases because there are more people vying for the same resources. Cities in particular are getting more overcrowded. So, when a refugee crisis does hit, more people are affected.

Those who are have fewer options of where to go.

How many refugees are in the world?

Current figures show there are 25.9 million refugees in the world (although the total number of people forcibly displaced stands at over 70 million).

It’s a harrowing figure that sits amongst the worst since World War II.

As you can clearly see, the strife continues to grow every year.

So although the current refugee crisis isn’t as great as it was in the early 1990’s, it remains one of the worst periods since World War II. It’s led to an explosion of refugee camps across the globe, as more and more people are displaced from their homes.

How do refugee camps work?

Once a person becomes classified, refugees are likely to retain that status for many years.

It’s a life of limbo, which leads many people to some form of refugee camp.

A refugee camp is a temporary facility to provide immediate protection and assistance to people forced to flee their homes. Although camps like these are not designed to provide permanent solutions, they do offer a safe haven for refugees and their families:

While they’re not designed for a long-term stay, the reality is that once someone enters a refugee camp, they’ll stay there for months (but likely even years).

They become a place of hope during an otherwise hopeless situation. And they provide water, security, healthcare, shelter, food, supplies, and a layout and structure that minimizes the risk of disease.

But not all refugees live in refugee camps.

In fact, around 60% of the world’s refugees live in cities (Turkey currently hosts the largest urban refugee population). Yet millions do live in refugee camps currently, with some of the largest residing in:

The largest, Kutupalong (in Bangladesh) houses more than 630,000 refugees.

Despite the many benefits refugee camps offer, they do not replace the homes and the communities people had to flee. Depression, anxiety, and PTSD are rife in refugee camps.

Women and girls, in particular, are on edge, fearful of trafficking and sexual violence.

Since it was enacted, It’s provided administrations a blueprint on how to handle the realities of modern refugee situations. More importantly, it’s established explicit procedures on how to deal with refugees in the US.

But this act alone is not enough. It provides help and a solution to the current problem, but it will not eradicate it.

We believe that to truly fix refugee crises, we have to go to the root of the problem. We have to end war.

That’s why we help fast, showing up on the frontlines to provide relief—stopped the spread of war.

We give help that lasts, creating jobs that provide income and reduce the chance of recruitment into violence—protecting the vulnerable from the risk of war.

And we heal the past, reaching across enemy lines to build relationships and learn from each other—changing the ideas that lead to war.

Fear leads to violence. Violence leads to war. And war leads to unimaginable hurting and pain for so many people—perpetuating the cycle.

We know there’s a better way. Join us.