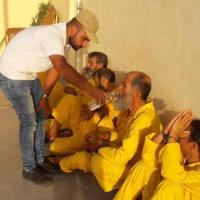 Gaza, Fallujah, Mosul: What Love Does in the Hard Places

“Why would you help those people?” We’ve heard it before. It never stopped us then, and it will not stop us sending help to Gaza now.

It’s 2016. A detention center outside Fallujah, Iraq, holds hundreds of men and boys accused of being with ISIS.

When the battle came to Fallujah and the city emptied, all the men and teenage boys were rounded up as they fled.

There is no easy way to tell the difference between innocent and guilty here. Between true believers, and those who went along with ISIS just enough to survive, and those who shouldn’t be here at all.

But it’s 115 degrees outside. These men and boys have had nothing to eat, little to drink, nowhere to wash, and they’re still wearing the same clothes as when they fled days before.

So this community of peacemakers does what love always does: it shows up with food, water, clothing. It doesn’t wait to judge who is “innocent” enough to deserve not to starve. It helps now.

Even when one of our colleagues, a friend named Sadiq, picks out his enemy from among the mass of men and boys—a man he saw on YouTube ordering the killing of his friend—love goes up to that man, holds a bottle of water to his lips, and says, “You killed my friend. I’ve come here to feed you.”

It’s 2017. The last neighborhoods of Mosul—the last ISIS strongholds in this city—are slowly being liberated. Or obliterated. Maybe a little of both.

The soldiers who accompany our aid teams bringing food into these neighborhoods—often just a street or two from the fighting still going on—they tell us the same thing. “Don’t go there. Don’t serve those people. They’re all ISIS.”

After months of brutal, costly combat, they no longer see the difference between civilian and combatant. Victim and victimizer. To be honest, sometimes the difference isn’t all that easy to spot out here.

Everyone left must be ISIS. If they were innocent, they would have fled by now. Never mind if they’re old. Or unable to walk. Or have small children to carry. Or just don’t want to risk being shot by an ISIS sniper. Or a trigger-happy soldier who mistakes you for an enemy combatant.

Even when the most battle-hardened soldiers tell us, “Don’t go there; they’re all ISIS,” this community of peacemakers does what love always does. It goes anyway. Because it knows that if you dehumanize your enemy, if you turn everything into “us versus them,” if you reduce every conflict to “good guy versus bad buy,” you are destined to repeat the same cycles of violence over and over again.

Love takes the risk and disrupts the cycle.

But Hamas! some clap back at calls to end the violence.

They’re all terrorists, some say whenever cries go out to help our Palestinian friends.

It’s their fault for firing all those rockets at Israel. As if all 2 million people crammed inside Gaza personally attacked their Israeli occupiers.

Some think that because a plurality of Palestinians voted for Hamas in elections last held a decade-and-a-half ago, they are somehow disqualified from our sympathy, much less solidarity. Some think their mere proximity to Hamas is enough to disqualify them—as if anyone in Gaza has any say where they live.

But thousands are injured. Thousands more are homeless. So this community of peacemakers does what love always does.

It goes to the hard places. It loves the people others do not want to love. It refuses to reduce them to “good guys” and “bad guys,” as if any of us are entirely one or the other.

Your love showed up in Fallujah. It didn’t judge who was good enough or innocent enough to “deserve” our help. It just helped.

Your love showed up in Mosul. It didn’t listen to the soldiers who told us, “Don’t help those people. They’re all ISIS.” Yeah, maybe some of them were. But a lot of them were just hungry.

Your love can send help to Gaza today, for the same reason it went to Fallujah, to Mosul. Because this is what love does.

We are partnering with one of the main hospitals in Gaza to provide emergency care as families emerge from the rubble, seek treatment, and work to rebuild. The best way to help families now and in the future is to become a member of our community of peacemakers—and give monthly.