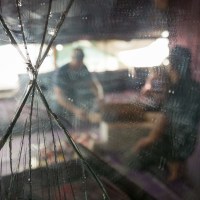 It has been over two years since the devastating Beirut Port blast paralyzed the already faltering Lebanese economy. Lebanon’s 2019 financial crisis, one of the world’s worst since the 1850s, caused its currency to plummet, spurring hyperinflation. Today, the Lebanese pound has lost 95% of its former value. As a result, approximately 80% of Lebanese live in poverty. Almost one-third of the country is unemployed while half are underemployed. Those who are employed have seen their salaries plummet by 84% due to hyperinflation, making the cost of food and other necessities out of reach for most people.

Electricity and water are scarce. Fuel shortages are common. Despite its own obstacles, Lebanon hosts 1.5 million displaced Syrians, which is almost 25% of its total population. Although the Syrian conflict has abated, Syria is still unsafe for vulnerable people. Less than 1% of Syrian refugees living in refugee camps or settlements in Lebanon are considering returning home.

Remittances, the money a country’s diaspora sends home, make up 54% of Lebanon’s Gross Domestic Product (GDP). Because the Lebanese financial crisis is rooted in its banking system, most Lebanese do not trust the banks. With widespread distrust of the banks and reliance on remittances for survival, Lebanon’s economy has become cash-based and pegged to the US dollar.

Until last week, mobile phone and internet costs were quoted in dollars according to the 1,500 LBP to 1 USD exchange rate. As of July 1, 2022, phone calls, mobile data, and mobile internet costs, which people rely on to communicate with loved ones far away, study online, and work remotely, will be priced according to the dollar exchange rate on the central bank’s official flexible exchange rate, which is currently pegged at 25,200 LBP to 1 USD. Many people will lose their phone connectivity and internet connections because they cannot afford to pay these costs.

Almost 80% of Lebanese households do not have enough food or money to buy food, which has increased in price by over 1000%. Food insecurity is compounded by the Russian invasion of Ukraine because Lebanon imports up to 90% of its wheat and cooking oil from Russia and Ukraine. Maneesh, a type of flatbread with toppings and a staple in the Lebanese diet, is primarily made from flour. Lebanese bakeries have already run out of wheat, and Lebanon’s flour reserves have dwindled to precarious levels. In the upcoming month, the government could reduce subsidies on flatbread, which sustains 80% of Lebanese people living in poverty.

COVID-19 on the Rise

COVID-19 cases are exponentially rising again while approximately 41% of the population is vaccinated. Meanwhile, Lebanon’s healthcare system is crumbling as a result of the economic crisis. Thousands of doctors and nurses, 40% of the nation’s medical staff, have left the country to find work abroad. Private hospitals, which used to serve 80% of health needs before the crisis, have had to close some of their departments, and the price of medicine has skyrocketed, increasing five or six-fold, after the government lifted price subsidies in 2021.

Public sector workers went on strike, shutting down schools and public services, making life much harder for everyday people in Lebanon. Passports can’t be renewed nor can identity cards, crucial for displaced people to access services, be issued. Basic government services have come to a halt. The strikers are demanding wage increases to counter hyperinflation and currency devaluation. They want a new government formed (despite recent elections) to steer Lebanon through the three-year-old financial crisis. The strikers are also protesting the lack of a consistent, affordable fuel supply. This open-ended strike began on June 13.

Lebanon may have left the international top-of-mind awareness, but many vulnerable families, both Lebanese and Syrian refugees, live in dire circumstances. We are standing with these struggling yet determined communities, providing food relief, listening, and looking for new ways to help.