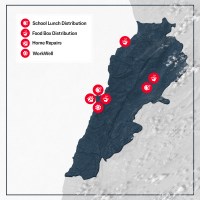 A weekly grocery bill that can equal several months of a typical family’s income. Families can’t withdraw their own money from the bank. Medicine is unavailable as is electricity, which flows for only a few hours a day. There are gas shortages too, so lines at gas stations are hours long.

Today, the World Food Program (WFP) estimates that food prices in Lebanon have gone up by 628% in two years.  Over 75% of Lebanese families have been pushed into poverty, and the local currency is worth 10% of its former value.

As the country struggles under dire economic conditions, it is host to 1.5 million Syrian refugees displaced by war, almost a quarter of Lebanon’s total population. Those who can are leaving Lebanon at a rate not seen since the Lebanese civil war, causing a brain drain for the country, which will worsen the economic collapse and slow the country’s recovery. In 2021, almost 78,000 Lebanese left the country compared to almost 17,800 in 2020. Poor Lebanese children and displaced Syrian refugee children no longer go to school because they need to work as day laborers, trash pickers, or beggars in order to feed themselves and their families.

Our community of peacemakers’ generosity allowed us to respond in the following ways:

The dire situation in present-day Lebanon has its roots in the 2019 financial crisis, which the World Bank describes as one of the most severe worldwide since the mid-nineteenth century. Real gross domestic product (GDP), the total value of goods produced and services provided by a country in one year, has fallen 58.1% since 2019. This is how it happened.

This policy brought stability but it also required Lebanese banks to hold large reserves of US dollars.  In addition, Lebanese businesses needed dollars to pay for imported goods, which are the majority of what Lebanese people consume (since Lebanon, one of the smallest countries in the world with limited natural resources, struggles to produce goods locally). The total value of Lebanese imports in 2019 was 14.2 billion while the total value of its exports was only 3 billion.

The Syrian civil war and the growing power of Hezbollah, an Islamic-based political party and militia which the US designates as a terrorist group, hurt Lebanon’s ability to attract investment dollars. Because Lebanon and Syria have had close economic ties for centuries, Lebanon is one of the few Middle Eastern countries to support Syrian President Bashar Al-Assad, which isolates it. As a result, there are fewer trade opportunities for Lebanon.

To keep dollars coming into the country, the Lebanese Central Bank offered 15 to 20% annual interest to anyone depositing US dollars. The people who deposited money early were repaid with money from newer customers, in something like a Ponzi scheme, which was unsustainable. In August 2019, the black market exchange rate for US dollars started to differ from the official exchange rate due to a lack of dollars in Lebanon’s money supply and the resulting government restrictions on the public’s ability to withdraw their own money from banks.

Following the October 2019 protests over a proposed government tax on individual WhatsApp calls, which many families use because phone calls are too expensive, the Lebanese government shut all commercial banks for two weeks. When they reopened, people were restricted from withdrawing their deposits of US dollars. This shook the Lebanese people’s confidence in their own currency. Between October and December 2019, the Lebanese pound was trading for 1,600 LBP for $1. By June 2021, the black market exchange rate was 15,200 LBP per $1 USD while the official exchange rate remained unchanged.

On August 4, 2020, one of the largest non-nuclear explosions destroyed the Beirut port and damaged over half the city. According to a Human Rights Watch report, 219 people were killed, 77,000 apartments were damaged, 300,000 people were displaced, and several thriving neighborhoods were destroyed. The blast affected 163 Beirut schools and left 50% of the city’s healthcare centers non-functional. The blast impacted 56% of private businesses, damaged essential infrastructure including transport, energy, the water supply, and sanitation services. It also caused environmental degradation due to the toxins released into the air during the explosion. Finally, the explosion has disrupted vital imports, such as wheat, corn, and barley, into the country because one of the main commercial ports is no longer functional.