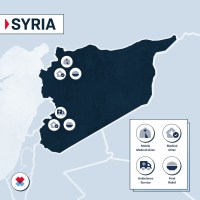 Syria’s singular story over the last decade has been one of hardship for its people. The Syrian civil war, now in its twelfth year, has officially killed over 350,000 people and led to widespread displacement. From a pre-war population of just over 21 million, 13 million men, women, and children have been displaced either internally or abroad.

Since 2010, the Syrian economy has shrunk by more than 60%, causing a collapse of social services, such as health, education, water, and sanitation. Hyperinflation has reached a rate of 8000%, pushing more than half the population into extreme poverty. Three out of five Syrians are food insecure.

Our relief response targeted food insecurity and medical services to combat the ill effects of violence. Together, with our community of peacemakers, we helped in the following ways:

Despite twelve years of civil war, conflict continues in Syria. As a result, key public infrastructure and civilian infrastructure (homes and private businesses) have been destroyed, and there is limited to no public funding available for people to rebuild. Explosive ordnance contamination poses further health risks for vulnerable communities. Violations of international human rights continue. People suffer from arbitrary arrest, illegal detention, torture, kidnappings, disappearances, and bribery/extortion if they are suspected of being sympathetic to opposition forces.

Many factors have caused the Syrian economy to teeter on the brink of collapse. The economic sanctions leveled by the US, the EU, and the Arab League in response to the repression of Syrian citizens during the civil war have hurt the very people sanctions were to help by further depressing the Syrian economy. The depreciation of the local currency coupled with hyperinflation has pushed more people into poverty and collapsed social services. For example, more than half of all Syrians need health assistance, but they are unable to obtain it. In 2021, 12.4 million Syrians were food insecure, and nearly half of all children were malnourished.

Healthcare facilities and healthcare workers have been attacked throughout the civil war. There have been 595 documented attacks on healthcare facilities, causing over 70% of medical professionals to leave the country. The healthcare system has become decentralized, making information sharing and coordination more difficult. Before COVID-19, overcrowding and poor nutrition increased cholera and diabetes among vulnerable communities. Medicine has become prohibitively expensive, and vaccine access is limited. During the pandemic, especially in northern Syria, where water and sanitation systems have been destroyed due to conflict and a high number of displaced people live in camps, preventive measures such as hand washing and social distancing are nearly impossible.

More than 26% of Syria’s gross domestic product (GDP) comes from the agricultural sector. The 2006 – 2010 drought, which was the worst in modern history, forced farming families to move to poor urban areas for survival. Not only did the drought displace communities, but it also hampered economic growth as it destroyed livelihoods. Currently, less rainfall and low water levels in the Euphrates river mean less access to clean drinking water, less water for domestic use, and an increase in water-borne diseases, further straining a collapsing health care system. Water shortages also mean less water for crops, resulting in smaller harvests and less income for the remaining farmers.