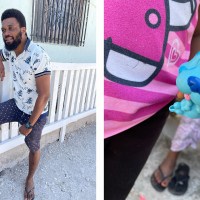 Like any parent, Dieudonn would do anything to give his daughter a better life. Unlike most of us, doing anything for Dieudonn meant climbing over the treacherous mountains inside the Darien Gap with his three-year-old on his back.

Dieudonn, originally from Haiti, had been living in Chile for years. His daughter was born there. The family’s life in Chile was good, for a while. Dieudonn would come home from his construction job and play with his daughter. He and his wife shared household and parenting responsibilities because sometimes they worked opposite days and hours. That’s why he can change a diaper, cook, clean, do the laundry, and make their favorite meal of chicken fried rice. However, Chile’s economic downturn, exacerbated by the COVID-19 pandemic, caused most construction jobs to disappear. At the same time, Chile’s hidden racism towards Blacks surfaced; for example, Dieudonn bought a car but was denied registration for it. These two factors pushed Dieudonn and his family to leave.

The Darien Gap, 10,00 square miles of dense, mountainous rainforest and marshland, is fraught with danger. Rivers flash flood, drug traffickers and bandits prey on vulnerable people crossing (migrant routes double as drug trafficking routes), and snakes and jaguars strike without mercy. Migrants have to cross countless rivers, leaving them damp and chilled. In a torrential downpour, the rivers can flood without notice, sweeping people away. Not everyone who tries to cross the Darien Gap makes it. Vultures circle and squawk overhead.

“The Darien Gap was the most difficult,” reflected Dieudonn as he recounted his family’s one-month journey from Chile to Mexico, where he and his family are now waiting for an asylum hearing. Unlike most families who cannot afford to do so, Dieudonn and his family took buses from Chile to Peru to Ecuador to Colombia, where their migration journey became more complicated, especially inside the Darien Gap. “We walked for 4 days, from 6 am to 6 pm to get through the mountains.” The trails are exceptionally steep with one slope turning into another and then another.

Dieudonn, his wife, his sister, and his sister’s son crossed during the rainy season. Soaked and freezing, he’d comfort his scared daughter by reassuring her that everything would be fine and they would be there soon. “I talked to her to calm her down.” Both he and sister piggy-backed their children, so the kids could talk back and forth as their parents climbed. To be safe, they traveled slowly, eating dried soup and drinking river water. By the time he arrived in Panama, he had stomach and leg injuries.

They left Panama by bus, crossing borders at night to avoid the police. Under a cover of darkness, they crossed a river from Guatemala into southern Mexico, where they were spotted by the authorities. Not knowing which way to go, Diedonn and his family were approached by a man who seemed to appear out of nowhere. He helped them avoid the National Guard by taking them to his house, and then proceeded to charge them $65 (approximately 1,350 pesos) per person to drive them to Tapachula, about ten miles away.

When Diedonn and his family reached Tapachula, there was no humanitarian aid available. He asked an organization for help but didn’t receive any, so he started looking for a job right away. Meanwhile, a local friend helped him find a place to live. He, his wife, his sister, his daughter and his sister’s son rented two rooms at 1,500 pesos per month while they waited for humanitarian visas, which allow them to travel in Mexico legally. Dieudonn found a job in the informal economy, for 200 pesos/day (approximately $10). He didn’t know if his wage was fair; he had seen how Haitians were discriminated against in the city, but he had a good relationship with his employer.

Being a dad in Tapachula was different from parenting in Chile. He and his wife worked twelve-hour days while his sister took care of both children, so he saw his daughter less, and got to play with her less often. Sometimes, the parents would switch roles, so he could spend time with the children. Living in 2 rooms together has made the two families one. Dieudonn told us, “We feel all of it together.”

After five months, The National Institute of Migration (INM) gave Dieudonn permission to travel to Cancun to get humanitarian visas for himself and his family. After they completed their paperwork, the family went to Monterey, where he worked a construction job for four months, and then to Juarez to apply for asylum in the US, where he has relatives. In the meantime, he and his family are staying in a shelter we’ve partnered with since the beginning of this migrant crisis, and most recently where we’ve installed additional solar panels to provide much-needed electricity, keeping the lights on, the air conditioners running, and the refrigerators cold.

Dieudonn describes himself as a different father now. He wants to be a better dad. He chokes up as he says how he wants to work, as his parents did for him, to “make what she [his daughter] wants possible.” His daughter doesn’t ask about returning to Chile because she knows they are going to the US, like so many of us have done, to live the American dream.

Right after we finished our phone call, Dieudonn received some amazing news. In two weeks, he will have his asylum hearing. It’s been almost a year since he left Chile, a year of death-defying displacement, hardship, and hard work powered by a father’s fierce love for his daughter. Now, he must wait, and within that wait grows hope.

*Special thanks to our Mexico team’s program officer Manuel Trillo for facilitating this interview by organizing the meeting and translating our questions and answers.