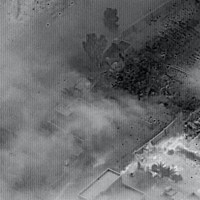 President Biden justified the latest airstrikes in Iraq and Syria as a necessary deterrent. Here’s why they won’t work.

The US launched what it called “defensive” and “limited” airstrikes in Iraq and Syria on Sunday, killing several people. The targets: two militia groups with ties to Iran. The strikes were retaliation for recent drone attacks on US bases in Iraq. They were also meant as a message to Iran, to discourage them from using violence to gain leverage over the US as the two countries negotiate a return to the Iranian nuclear deal.

The Biden administration claims the strikes were necessary to deter ongoing attacks. It is a strategy presidents from both parties have pursued for three decades now in Iraq and, more recently, in Syria—without success.

What is important to understand is that even “limited” military engagements can have unintended consequences. Knee-jerk partisan reactions will not serve us well in moments like this, which is why our message is the same every time, regardless of who gave the order as commander-in-chief:

We cannot bomb our way to peace.

We cannot help our friends in Iraq on the path to peace and stability if we do not honor their sovereignty. Iraqi officials have long objected to these airstrikes, yet the US continues to use Iraq as a convenient stomping ground for its proxy wars. (To be fair, the same can be said about Iranian interference in Iraq.)

Ironically, President Biden ordered these strikes just as Congress is considering a bill to repeal the 2002 authorization that allowed the US to invade Iraq almost two decades ago—a repeal the President says he supports. Strikes like these are precisely why this repeal matters. Presidents from both parties have long used the 2002 bill as cover for a host of military engagements without seeking congressional approval, both in Iraq and beyond.

As long as the US asserts the right to bomb, invade, and occupy another country’s sovereign territory in the name of self-defense, the people of that country cannot move toward peace.

Actions like these also send a mixed message to the rest of the world. While campaigning for president, candidate Biden was sharply critical of his predecessor’s military interventions, calling them “erratic” and “impulsive,” including one occasion where President Trump authorized but then cancelled airstrikes against Iran. When Trump ordered the assassination of Iranian Major General Qassem Soleimani in January 2020, Biden called the then-president “dangerously incompetent” and accused him of needlessly setting the US and Iran on a collision course.

While Sunday’s airstrikes were less brazen than the assassination of a prominent Iranian official, it is hard to see how they don’t also push the US and Iran further down the path to war.

The US has bombed Iraq in the name of peace every year since 1991. Iranian and American forces have been trading shots at one another in both Syria and Iraq for years. Yet it never seems to work. It never seems to be quite the deterrent both sides expect it to be.

When we say “we cannot bomb our way to peace,” it’s not just a catchy slogan. The last 30 years of evidence is overwhelming. So maybe it’s time for all sides to try something different. Maybe it’s time to try engagement rather than isolation or retaliatory attack.