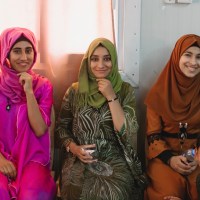 Imagine living in a world ravaged by war where you’re forced to uproot your family and take them on a dangerous journey because you’re worried you may not survive the night. Imagine this happened not only to you, but your friends, family, and neighbors.

Imagine having already lost a lot of people you love.

This is the reality that tens of millions of people wake up to each day.

Refugee Facts: Why It’s Important to Know Them

Ignorance stands between awareness and understanding. Unless you go through it, it’s impossible to truly understand the pain someone experiences.

Empathy is one of the most powerful tools we have. It doesn’t solve everything, but empathy allows you to build bridges and create connections. Empathy teaches you to see past differences, to see the person, and to love anyway.

But ignorance stops you from learning. It keeps your eyes shut. It’s easier this way, to not know the facts, because once you know them, you start to carry responsibility for creating change.

There is a real refugee crisis in the world, but it’s easy for so many to in ignorance. Once the refugee crisis becomes real to you, you start to see it less as numbers and headlines, and to understand the people, the individuals, the families. You can no longer sit on the sidelines.

This is why gaining a real understanding of refugee statistics is important. Knowing these refugee facts will open your eyes. It empowers you to see the world around you for how it actually is. It makes it more real, more concrete.

How Many Refugees are There in the World?

There are more refugees in the world today than at any other point in recorded history.

More today than during the first or the second World Wars. There are 25.9 million refugees in total. But this is only part of the story. More than 70 million people have been forced to flee their homes.

More than 70 million people on the run, without their home, their community, their support network. 70 million people who cannot return home. They’re not sure what home is anymore. Is their house still standing? Their neighborhood? Many of these people are stuck in limbo as they seek asylum somewhere else. They’re traveling to foreign countries, unsure what awaits them.

Refugee Statistics You Should Know

They aren’t just a number. These are families with children. These are people who had jobs like you. They were business owners and teachers, kids at the playground, grandparents, and members of faith communities.

It’s not enough to simply be aware that this is happening. That doesn’t stop the problem or create change. Learning is the first step.

Here are a few resources to help:

And as you learn,  you can make changes in your own life. You can have conversations with friends and family. You can find organizations that are helping refugees in your own community. You can become part of the solution.

Refugee camps are temporary facilities built to provide immediate protection for people forced to flee their homes. They are not built as a performant solution. They’re a short-term safe haven for refugees to receive food, shelter, and medical assistance.

Yet many of them remain intact for years. They grow and become cities in their own right.

Can you imagine fleeing your home and spending twelve years in a temporary camp? A camp designed to help you survive, not thrive. A camp that’s often plagued with crime, disease, and a lack of resources.

Refugee camp facts like these give you further insight into just how bad the problem is. Refugee camps save lives. But they are not built for the long term.

They do not replace an actual home.

Refugee Facts That YOU Can Use To Change The World

Learning refugee facts is only the beginning. Knowledge of any kind only goes so far. It’s what you do with it that matters. This is why we’re so passionate about the work we do. We help facilitate change. Relief, to stop the spread of war. Jobs, to help protect the vulnerable from the risk of war. And peacemaking, to change the ideas that lead to war.

More than 70 million people don’t have to learn refugee facts. They live them, every day. They didn’t choose it. And they don’t know when—or if—they will ever return home.

We can stand beside them. We can see their humanity, their promise, their strength. We can show up on the frontlines with food and medical care. We can stay with them as they start businesses, providing for their families, and rebuilding their communities. And we can continue to lean into hard conversations, healing divides, to stop the next war from ever starting.