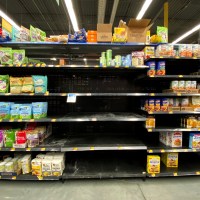 Families fleeing with only the clothes on their backs. Strollers and suitcases abandoned near railway station platforms. Fathers hugging their children goodbye at the border, perhaps for the last time. For those of us whose heritage is Ukrainian or Russian, or whose parents or grandparents had to resettle in foreign countries due to war or violence, these images remind us how our similar experiences connect us to one another.

Over 10 million Ukrainians have been displaced, nearly a quarter of the country’s population, with 4.2 million becoming refugees. Those who remain in the country, either from a sense of duty or because they are too old, too sick, or too poor to leave, face food, water, heat, electricity, fuel, and medicine shortages. The crisis also brings into sharp focus what so many men, women, and children in conflict and post-conflict zones have been experiencing, sometimes for decades.

Many or most farmers in Ukraine will probably miss the planting season this year. Some have had their fields ravaged by conflict. Others are busy fighting for their country’s sovereignty and cannot farm. All lack enough fuel for tractors, which has been diverted to the Ukrainian military, to plant or harvest.

The situation in Ukraine mirrors the plight of farmers in Afghanistan, who fled fighting between the Taliban and the Afghan military in 2021. When Afghan farmers returned home, some discovered military campaigns had destroyed their farms, leaving their land unsuitable for planting. Others had missed the planting season when they had fled violence. As a result, come autumn, many farmers did not have any harvests. Most cereals grown in Afghanistan are grown for self-consumption, and because insufficient crops were planted last year, 23 million Afghans do not have enough to eat now.

Through our community of peacemakers, we launched our first food relief project in Afghanistan in December. 500 starving moms, dads, and kids received monthly food boxes. In March, 2022, we implemented our first winterization program, bringing freezing families warm blankets, which they’ll use until at least May.

Lebanon has been hit with crisis upon crisis. Like Ukrainians now, Lebanese families have limited access to medicine, electricity, and gasoline. Hyperinflation, an almost worthless currency, political corruption, and high unemployment have decimated the middle class, pushing over 75% of Lebanese families into poverty. Now a weekly grocery bill costs several months’ worth of salary.

The war in Ukraine is further worsening food insecurity in Lebanon, which receives 80% of its wheat imports from Ukraine. A Russian blockade of Ukraine’s ports means Ukraine is not able to sell millions of tonnes of wheat and corn designated for a June export. Lebanon can store grain reserves for only one month as a result of the Beirut port explosion in 2020, which destroyed Beirut’s grain silos. Because of the shortage of wheat in Lebanon, food prices are rising.

While Lebanon searches for alternative wheat suppliers, Preemptive Love is committed to continuing our relief efforts there. We are distributing monthly food boxes to vulnerable families so their children can stay in school, learning to read and write, instead of going out to beg or work as day laborers. While in school, hundreds of hungry children receive a nutritious hot daily meal so they have the mental energy to keep learning. We are offering online tech training and soft skills building through our tech hub program, so young Lebanese professionals will be competitive in the virtual job market.

In Syria, 90% of people live in poverty, unemployment is at 60%, and 6 out of 10 people don’t know where their next meal will come from. Because of ongoing international sanctions, Syria receives much of its wheat from Russia, but the war in Ukraine is disrupting food and fuel imports. As a result, the Syrian government is rationing food reserves, including wheat, sugar, rice, and oil in response to fears of price increases and shortages.

A lack of well-paying jobs drives young men to join Syria’s military, furthering violence. Currently, President Assad’s army is recruiting soldiers to fight alongside Russians in Ukraine by promising contracts valued from $600 to $3,000. Since the average monthly salary in Syria is $15, many recruits have no other way out of poverty.

Through our community of peacemakers, we will continue to show up in Syria, providing much needed medical relief. We will continue to create jobs for Syrians by buying their artisanal, hand-knit toys and selling them in our on-line shop.

In late December, 2020, the Iraqi government devalued the local currency by 24% to slow the drawdown of foreign currency reserves. This decision increased the cost of living for everyday Iraqi and Kurdish families already struggling in the wake of the pandemic. The war in Ukraine has caused a shortage of grain on the world market, causing price surges throughout the world. In response, Turkey and Iran have restricted food exports to Iraq to save what they have for their own  use. As a result, protests over increasing food costs have begun in Iraq, where the price of rice, flour, and cooking oil have recently doubled (cooking oil) or almost tripled (flour).

Together, we continue to help people affected by war and violence in Iraq. We are trialing water-saving farming techniques and harvesting nourishing food on our sustainable farm to feed vulnerable families, training and employing women to make artisanal handmade items in our Maker’s Space, providing teachers so Syrian refugees in northern Iraq can finish high school, opening hundreds of small business in Iraq so parents have sustainable livelihoods, setting up the first female-owned farms in southern Iraq to provide steady incomes and giving hundreds of young Iraqis who came of age during wartime valuable tech and job skills training in our tech hubs.

Some Ukrainians fleeing violence have made their way to Mexico, from where they seek asylum at the US – Mexico border. US Customs Border and Protection officers can exercise their judgment to exempt Ukrainians from Title 42 and process them under regular immigration procedures, which allow them to seek asylum immediately. Title 42, which is scheduled to end on May 23, 2002, is a public health and welfare statute which allows the US border patrol to deny entry to foreigners who might carry a communicable disease before they have the opportunity to request asylum. Throughout the pandemic, it has been used by the US government to expel Haitian and Central American asylum seekers at the border back into Mexico, if they are from Mexico or Central America, or to their country of nationality. Title 42 is different from the “Remain in Mexico” policy, which forces migrants from countries other than Mexico to remain in Mexico while their asylum cases inch their way through the US immigration court system. Migrants apply for asylum from tent encampments or shelters in dangerous cities on the Mexican side of the border.

Our community of peacemakers is committed to helping migrants, internally displaced persons , and asylum seekers as they wait for their cases to be processed at both the northern and southern borders of Mexico. At the northern border, we have installed mini splits in a local shelter to provide heat to migrant families in the cold winters. We have installed a water filtration system so families do not need to leave the safety of the shelter to get clean drinking water. We are providing tech training, English language training, and soft skills development to our migrant friends, so they will be able to contribute to their new communities when they finally settle. We have planted and harvested food on our agricultural projects (one at the northern and one at the southern Mexican border) to provide jobs and nutritious food to vulnerable families. We’ve provided food boxes and baby wraps for families on the move as they enter southern Mexico. We are supporting a safe house with food supplies, water, and hygiene products. so our migrant friends can rest and restore themselves on their journey away from violence.

Around the world, families sit transfixed by news feeds, united in our joint concern over displacement and survival amidst war and violence. These issues plague Ukrainians as well as our in-need friends in Afghanistan, Lebanon, Syria, Iraq, Mexico, Colombia, and Venezuela–places where Preemptive Love, through our community of peacemakers, runs life-saving relief programming in our efforts to stop the spread of violence.